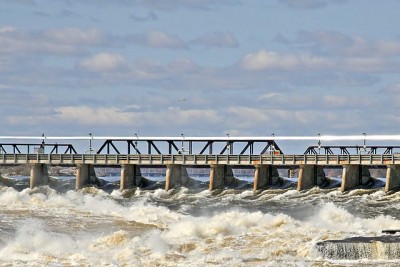 A hydro station in Gatineau, Que. U.S. legislators are looking to the province’s vast hydro reserves as they aim to eliminate carbon emissions. PHOTO: Pierre Tourigny, via Wikimedia Commons

BOSTON—Tapping into Canadian hydropower is hardly a new concept in energy-starved New England. But Massachusetts Gov. Charlie Baker’s proposal to authorize long-term contracts between utilities and hydropower producers is being viewed in some quarters as a potential game-changer for the region.

The move is not without doubters, and the question of how to deliver Canadian hydro on a large scale remains unanswered. Among several plans yet to secure final approval are the $1.4 billion Northern Pass project, designed to bring 1,090 megawatts of Hydro-Quebec power through New Hampshire into southern New England and a 1,000-megawatt transmission line beneath Lake Champlain in Vermont. A single megawatt can power up to 1,000 homes.

Without a hydropower infusion, Baker contends his state won’t meet its 2020 target of reducing greenhouse gas emissions by 25 per cent from 1990 levels. Beyond that goal, the governor and other regional leaders point to a practical need to replace electricity generation that has or will soon disappear from the energy landscape.

Several oil and coal-fired plants, mostly in Massachusetts, have been mothballed in recent years. Pilgrim Nuclear Power Station in Plymouth will close by 2019; another nuclear facility, Vermont Yankee, was shuttered in 2014.

In all, plants generating 4,200 megawatts of power have closed or will be retiring soon, and ISO-New England, the regional grid operator, has identified an additional 6,000 megawatts at risk of retirement by 2020—adding up to 25 per cent of the region’s available resources.

Massachusetts, the region’s most populous state, has the biggest energy appetite and typically accounts for roughly half the typical weekday demand.

If the lost power isn’t replaced, Baker warns, the state and region will fall prey to an uncertain global energy market and be forced to rely more on carbon-producing fossil fuels.

“That would be the ultimate lose-lose,” he said. “Unpredictable, high-priced and less green than our current situation.”

The legislation would direct electric distribution companies in co-operation with the state to solicit competitive bids for long-term deals with hydroelectric producers. While current law permits hydropower procurement, administration officials believe it’s unlikely to occur without the incentive of longer contracts.

“Subsidizing an overdependence on one foreign government-owned source of electricity will lead to lost jobs and soaring energy bills for decades to come,” said Dan Dolan, the group’s president.

Dolan said new plants with significant generating capacity are coming online, most fired by natural gas—which already accounts for nearly half the region’s transmission capability. Hydro-Quebec, he argued, would use increased U.S. exports to subsidize lower prices for its provincial customers, in turn costing New England ratepayers an estimated $20 billion over 25 years.

In a statement, Hydro-Quebec said Baker’s bill would “further enhance the opportunity for a multi-state clean energy procurement that can deliver benefits throughout the region.”

Some environmentalists are uneasy with the hydro push, fearing it could shift the focus from developing renewable energy sources, notably offshore wind. Hydropower dams, while less environmentally harmful than carbon-based fuels, can disrupt water quality in rivers and damage ecosystems, according to critics.

In Maine, Baker’s fellow Republican Gov. Paul LePage has long pressed for all renewable resources to compete—including hydropower and even nuclear power.

“We have always called for including all renewable resources and letting them compete. Consistent with that, we strongly think that the region should not discriminate against any clean energy source,” said Patrick Woodcock, LePage’s energy chief.

For his part, Baker talks of a “combo platter” of energy resources that include generous portions of natural gas, hydropower and renewables. His legislation also encourages utilities to contract with offshore wind project developers and other clean energy generators.

Leaders of the Democrat-controlled Legislature appear warm to Baker’s bill, but it has yet to emerge from committee. The legislative session runs through July 31.