New report shows U.S. electricity sales declined in 2015, the fifth time in the last eight years that has occurred 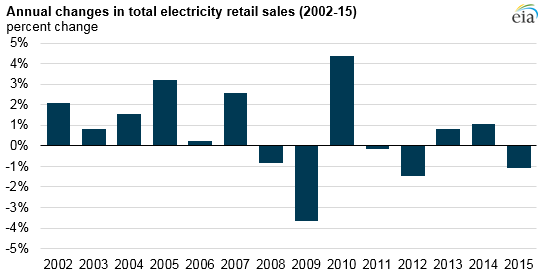 WASHINGTON—The U.S. economy continues to expand, yet unlike in the past, electricity sales are not necessarily advancing with it.

A report this week from the U.S. Energy Information Administration shows the U.S.’s total electricity sales fell by 1.1 per cent throughout 2015, even as the country’s GDP inched ahead.

2015 marked the fifth time in the past eight years that such a drop has occurred.

The declining usage is the result of a number of factors, most prominent among them, the increased use of energy efficient equipment, the changing composition of the American economy and market saturation. The slower rate of economic expansion when compared to previous periods is also playing a role in declining sales.

In terms of energy efficiency, the EIA notes that some advances have been market driven, while others have been regulatory. Federal energy efficiency standards for appliances and lighting equipment, for example, have helped reduce electricity consumption in the home. As state-owned utilities have been ordered to provide energy efficiency programs to their customers, more stringent building codes in some states have also contributed to the decline.

While the residential space has pared back its usage, the report notes it is in the industrial sector where the majority of the decline has occurred. Between 2000 and 2015, electricity sales to industry decreased at an annual average rate of 0.7 per cent. Though industry experienced a shock in 2009, resulting in a major, immediate decline in electricity consumption, since that time, the sector has bounced back. Electricity usage has not increased with it, however. And as the return on investment for energy efficiency retrofits becomes even more attractive, the energy-saving trend is expected to continue.