Canadians owe the world a $400B ‘climate debt,’ study says 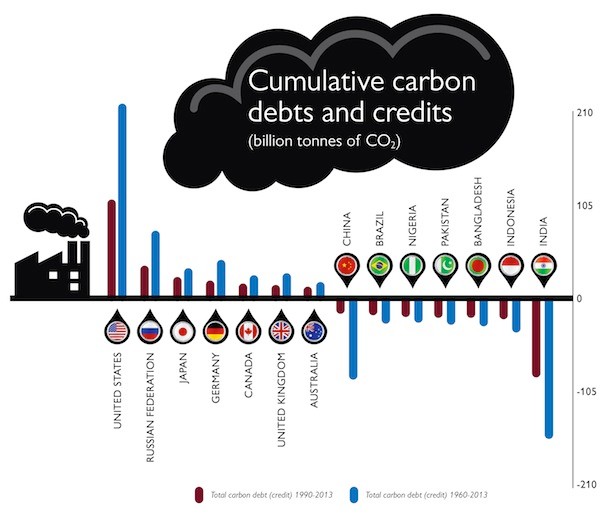 The study shows the U.S. has accumulated about 40 per cent of the world’s climate debt, while Canada accounts for about 4 per cent. PHOTO: Concordia University

And the carbon-steeped debt is significant.

Based on their average per capita carbon dioxide emissions, the world’s richest nations are the main culprits, with the U.S., Russia, Japan, Germany, Canada, the UK and Australia leading the way. Assuming the current best estimate for the cost of carbon, which is US$40 per ton, the top polluters owe the rest of the world approximately $10 trillion in climate debt.

The study’s author, Damon Matthews, a Concordia University professor and researcher, noted the U.S. alone accounts for 40 per cent of the debt, while Canada carried 4 per cent. In respect to the total $10 trillion, that saddles the U.S. with $4 trillion and Canada with $400 billion, or over $1,000 in debt for every Canadian.

“Thinking of climate change in terms of debts and credits for individual countries shows how much countries have over- or under-contributed to historical warming, relative to their proportion of the world’s population over time,” Matthews, said in a statement.

The study’s underlying message is that countries who have contributed to climate change the most should pay the global costs of climate mitigation and damages.

“This paints a striking picture of the historical inequalities among countries with respect to their greenhouse gas emissions and consequent responsibility for climate changes,” Matthews added.

In the build-up to the climate talks scheduled for December in Paris, the researcher hopes the study will lead to stronger and more meaningful goals, both to address climate change itself and emission inequity.