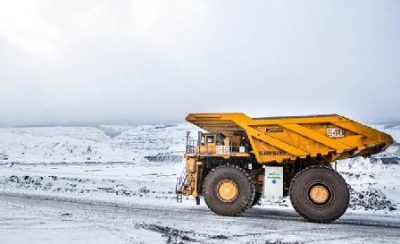 Canadian mining firms have been working on a variety of emissions-reducing initiatives in recent years, including an LNG truck project launched by Teck Resources Ltd. last year. PHOTO: Teck

OTTAWA—The Mining Association of Canada (MAC) has thrown its support behind the movement to establish a national price on carbon.

Made up of a wide range of resource extraction firms, including some of the largest names in the Canadian mining industry, such as Teck Resources Ltd., Barrick Gold Corp. and Cameco Corp., MAC is calling for a broad-based carbon price applied to all sectors of the Canadian economy.

“Today, one of Canada’s largest industries is coming out in support of a carbon price, identifying it as the most effective and efficient means of driving emissions reductions and making real progress in the global fight against climate change,” Pierre Gratton, the association’s president and CEO, said.

“MAC’s support of a carbon price is guided by our principles for climate change policy design, and is based on 16 years of our members’ continuous efforts to reduce emissions through technology and innovation and become more energy efficient,” Gratton added.

Along with the announcement, the industry group released a policy document highlighting the mining sector’s recommendations for establishing a carbon price. The main tenets of the plan include: