Airex Energy's $10 million facility, in Bécancour, Que., will produce biocoal and biochar, materials that can be used for combustible energy, water purification, soil remediation and metallurgy 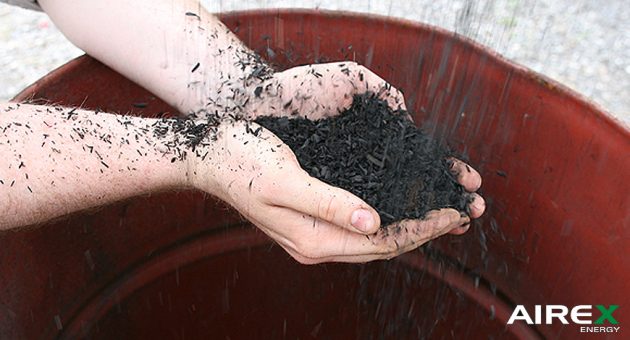 On Feb. 24, Airex Energy officially inaugurated its biomass torrefaction plant, in Bécancour, Que.—which required around $10 million in public and private investments for its design, construction and start-up.

The company has been conducting gradual commissioning of the plant’s equipment and performing tests to optimize the torrefaction process since 2015.

The Bécancour facility is the first plant of its kind in Canada.

Torrefaction is a process by which biomass is transformed by a thermochemical decomposition into a fuel with more efficient combustion or gasification qualities.

In the case of Airex Energy’s torrefacation process, recycled wood is turned into organic combustible pellets, called biocoal, through drying and heating.

What makes Airex Energy’s process unique is that it is performed in three seconds, as opposed to half an hour for similar torrefaction technologies. The final product typically contains 70 per cent of the mass and 90 per cent of the energy content of the pre-treated material.

The biocoal pellets produced by this process can be co-fired with bituminous coal to significantly reduce greenhouse gas emissions. Introducing biocoal into thermal power stations doesn’t require major changes to existing systems, and the material is water-resistant, so storage is cheap and low-maintenance.

Biocoal can also be used as a reducing agent in iron, as well as a purification agent for gold, water, gas and a means of metal extraction.

The forestry industry is the primary market for these systems. The processing of wood residues into value-added products can allow companies in the sector to increase their profitability while diversifying their sources of income.

If sawmills and pulp and paper producers begin adopting torrefaction and selling biocoal to power plants, the environmental impact could be massive.

“With Canada’s commitment to a 30 per cent reduction in greenhouse gas emissions by 2030, compared to 2005 levels, we are confident that our unique torrefaction process can replace coal used in thermal power plants for electricity production, without requiring changes or major investments to existing systems and equipment,” said Sylvain Bertrand, CEO of Airex Energy.