Despite Sask. Premier Brad Wall's bluster about the federal carbon tax, it and other coal-reliant provinces have committed to clean up their grids: CanWEA 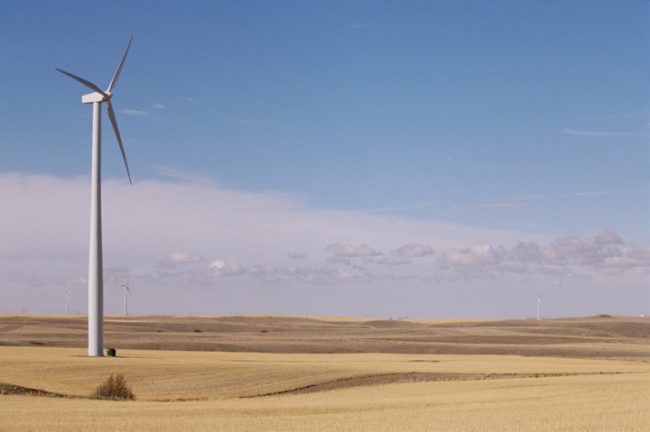 Wind and solar projects are expected to make up three quarters of all new Canadian energy capacity between now and 2040. PHOTO: CanWEA

MONTREAL—Canada is well-positioned to transition to a low-carbon economy as wind and solar projects will be the focus of energy investments over the next two decades, a national wind energy conference was told.

Global investments over the period are expected to exceed US$10 trillion, with wind accounting for US$3.3 trillion and solar US$2.8 trillion for a combined 59 per cent.

Robert Hornung, president of the Canadian Wind Energy Association, said Canada has to use clean electricity as much as possible in all end uses as the country tries to meet the goals of the Paris Agreement on Climate Change.

“As the most cost-competitive form of non-emitting generation available today, wind energy will be at the forefront of this effort,” he told delegates Oct. 4.

Hornung said Canada can completely decarbonize its electricity system. With its untapped reserves of wind, hydro, solar, geothermal and tide power resources, Canada is better positioned than almost any other country to have a 100 per cent climate-friendly grid.

“If Canada can’t do it, nobody can,” he said at the opening of the three-day conference in Montreal that will feature a speech on Thursday from Natural Resources Minister Jim Carr.

Canada is the world’s eighth largest producer of wind power with almost 12,000 megawatts of production, led by Ontario and Quebec.

The oil producing provinces of Alberta and Saskatchewan are expected to undergo the country’s biggest wind production growth by adding 7,000 megawatts by 2030 as they aim to reduce greenhouse gas emissions.

Because Saskatchewan Premier Brad Wall opposes the carbon tax, many assume he doesn’t want anything to do with renewable energy.

“But that’s not the case. In reality what we’re seeing in Saskatchewan is a very ambitious goal for bringing wind on in the province,” said Evan Wilson, CanWEA’s regional director in charge of Western Canada.

Wind is not ideological, added Jean-Francois Nolet, vice-president of policy and government affairs at CanWEA.

“The main driver for wind and why wind is built is costs, because it’s cheap and reliable,” he said in an interview.

Nolet said Bombardier’s trade battle with the U.S. is a warning sign about potential consequences of government subsidies on accessing the large American market to sell electricity.

He said Canada has to be careful about how electricity transmissions lines to the U.S. are funded and can’t risk being accused of dumping.

“If we see big subsidies for transmission projects for example, the Americans can question how is it fair?”

Any federal funding of big infrastructure projects related to north-south energy transmission would have to be done in a way that doesn’t block exports, which will be a big driver of renewable energy demand in eastern Canada, Nolet added.

Bombardier faces huge tariffs after the Department of Commerce sided with Boeing’s complaint over exports of the CSeries commercial jet. It imposed 220 per cent preliminary countervailing duties on eventual exports and is expected to announce large preliminary anti-dumping duties on Thursday.

A final decision on export duties will depend on a ruling in December by the department or the U.S. International Trade Commission early next year on alleged harm to Boeing.