After leapfrogging across U.S., solar plane embarks on transatlantic flight 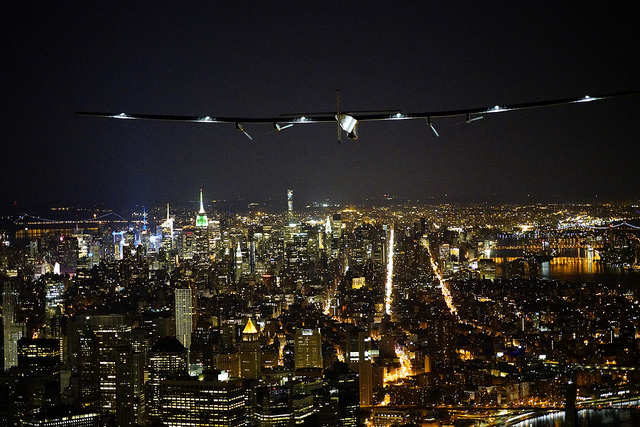 Solar Impulse 2 over New York City. The plane spent several days in the eastern U.S. city before embarking on its flight across the Atlantic. PHOTO: Solar Impulse

Aiming to book yet another place in history as the first solar powered plane to cross the Atlantic Ocean, the aircraft outfitted with more than 17,000 solar cells on its wings, is expected to touch down in Europe after a significant 90-hour flight.

“Lindbergh’s transatlantic flight marked a new area in aviation and contributed to the progress of air transport on a large scale,” Piccard said. “With Solar Impulse, our aim is to encourage the deployment of clean technologies everywhere. If an airplane can fly day and night without fuel, everybody could use these same efficient solutions in their daily lives.”

After more than a year in transit, the Solar Impulse team is closing in on their round-the-world goal. The journey began in Dubai in March of 2015.

To complete the circuit though, Piccard must first navigate across the Atlantic—one of the most dangerous legs of the trip. Solar Impulse crossed the Pacific to Hawaii last year, but was forced to remain in the chain of mid-Pacific islands for approximately nine months to repair the aircraft; the nearly 116-hour flight from Japan had severely damaged the plane’s batteries.

Sporting a retrofitted cooling system in response to the overheating issue that fried the aircraft’s original power packs, the crew hopes to avoid any heat-related entanglements on the trip from the U.S. to Spain.

Piccard is expected to touch down at the Seville Airport June 23.