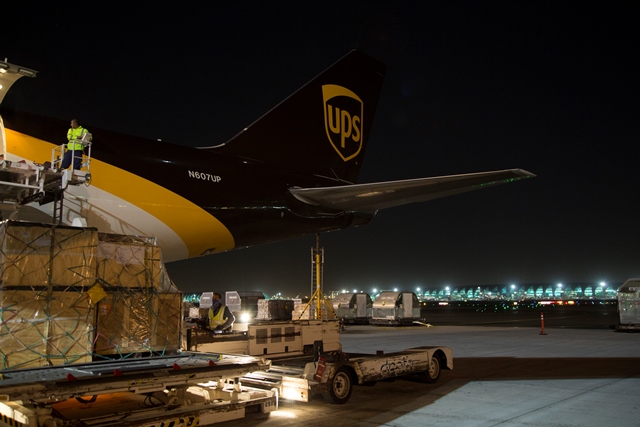 The crunch of deliveries, particularly around holidays, have caused problems for the major parcel carriers. PHOTO: UPS

Shares of FedEx and UPS slipped following a media report that Amazon.com Inc. is readying its own air delivery service, meaning not only that the companies may see diminished business from a massive client, but that they might have to compete against it.

Rumours have swirled for some time that Amazon has explored bringing some of its delivery services in house to take control of the process and avoid delays often seen around the holidays.

UPS was caught off-guard by the crush of online shopping leading up to the recent holiday season and said this month that it must spend a chunk of its tax-cut savings to improve its package-delivery network.

On Friday The Wall Street Journal, citing anonymous sources, said that Amazon is planning a new service called “Shipping With Amazon” that will allow it to pick up packages from businesses and deliver them to consumers. The service is expected to start in Los Angeles in coming weeks, before it is rolled out more broadly as soon as this year.

Neil Saunders, the managing director of GlobalData Retail, said Amazon’s entry into the delivery business would “send shivers down the spines of the traditional delivery companies.”

“The danger for the traditional delivery firms is twofold. Firstly, they are likely to lose business from Amazon; this will be slow at first but will accelerate as Amazon rolls out more of its own delivery services,” Saunders wrote. “Secondly, if Amazon starts offering delivery to businesses, it will likely do this at a reduced rate.”

Amazon has been edging into the delivery business for some time. In August 2016, the company unveiled its first branded cargo plane, one of 40 jetliners that were expected to make up its own air transportation network.

Shares of United Parcel Service Inc. and FedEx Corp. slid between 1 per cent and 2 per cent at the opening bell, after a more severe sell-off in premarket trading.