Stretching 57.09 kilometres, the Gotthard Railway Tunnel plunges to 2.3 km below the surface at its deepest point 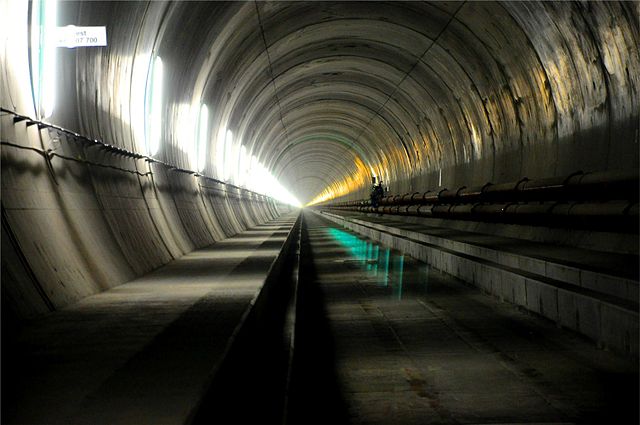 The new tunnel eclipses Japan’s 53.8-kilometre Seikan Tunnel as the world’s longest and bores deeper than any other tunnel in the world. PHOTO: W.Rebel, via Wikimedia Commons

GENEVA—Just like Hannibal in ancient times, Swiss engineers have conquered the Alps.

More than 2,200 years after the commander from the ancient North African civilization of Carthage led his army of elephants and troops over Europe’s highest mountain chain, Swiss leaders have completed another gargantuan task—and on time: Burrowing the world’s longest railway tunnel under the Swiss Alps to ease trade and congestion in European trade and travel.

Switzerland on Wednesday was inaugurating the Gotthard Railway Tunnel, a major engineering achievement deep under snow-capped peaks carried out over 17 years at a cost of 12.2 billion Swiss francs (US$12 billion).

Many tunnels today crisscross the Swiss Alps, and Gotthard Pass already has two—the first, also a railway tunnel, was built in 1882. But the Gotthard Base Tunnel is a record-setter: It eclipses Japan’s 53.8-kilometre Seikan Tunnel as the world’s longest and bores deeper than any other tunnel, running about 2.3 kilometres (1.4 miles) underground at its maximum depth.

The thoroughfare aims to cut travel times, ease roadway traffic and draw cargo from pollution-spewing lorries trucking between Europe’s north and south. Once it opens for commercial service in December, the two-way tunnel will take up to 260 freight trains and 65 passenger trains per day.

Swiss planners have dreamt of such a tunnel for decades. And it should have an impact far beyond Switzerland for decades to come.

Switzerland has pulled out the stops for Wednesday’s inauguration. German Chancellor Angela Merkel, French President Francois Hollande and Italian Prime Minister Matteo Renzi are all on hand for a glitzy celebration featuring musical bands, dancers and even a tunnel theme song.

The EU turnout is little surprise: The project, while cutting a north-south axis through central Switzerland, has received financial support and industrial know-how from around the European Union. Though Switzerland isn’t one of the bloc’s 28 members, the EU railway network will get a major boost from the shortcut through the Alps—notably on the route from Germany to Italy.

Like many Swiss trains, the project has come in on schedule.

Guy Parmelin, the Swiss minister of defence and civil protection, told national television that the tunnel gives his country a chance to display its “knowhow” and show “when Switzerland takes on a commitment, it keeps it.”

Forces under Parmelin’s command were taking little chance with security for the inauguration: Almost 2,000 additional Swiss troops were called in to help keep watch this week, and air space restrictions were put in place in the area. The tunnel runs between the German-speaking town of Erstfeld in the north and Italian-speaking Bodio in the south.