The study outlines increased spending on Canadian and U.S. infrastructure in the Great Lakes and St. Lawrence shipping system over the last five years 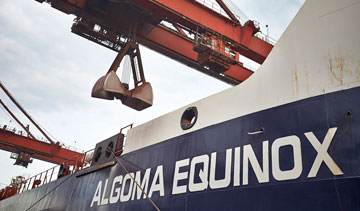 OTTAWA—A new study reveals that more than $7 billion is being spent on asset renewal and infrastructure improvements in the bi-national Great Lakes-St. Lawrence shipping system.

“The Great Lakes and St. Lawrence Seaway are integral to ArcelorMittal’s steel and mining facilities in both Canada and the United States as we utilize shipping for millions of tons of both raw materials and finished products,” said Sean Donnelly, president and CEO, ArcelorMittal Dofasco

“Our supply chain, which includes shippers that move our material, is critical to our business. Investments in fleet renewal with environmental, productivity and efficiency gains as well as reliability and availability improvements to infrastructure contribute to our business success and to the sustainability and profitability of the entire marine transport supply chain,” said Donnelly.

More than $4.8 billion has been invested in the navigation system from 2009-2013 and another $2.3 billion is committed to improvements from 2014 to 2018. Two-thirds of the capital (67 per cent) was invested by private companies with 33 per cent coming from government funding.

Canadian, American and international ship owners are spending $4.1 billion on the biggest renewal of the Great Lakes-St. Lawrence fleets in 30 years, of which $2.3 billion is being spent by Canadian ship owners.

The Canadian and United States federal governments have dedicated nearly $1 billion to modernize the Seaway’s lock infrastructure and technology over the 10-year period. The money is being directed through management agencies such as The St. Lawrence Seaway Management Corp. and the Saint Lawrence Seaway Development Corp.

The Chamber of Marine Commerce, one of the trade associations that commissioned the survey, says the regulatory climate has been key in spawning the flurry of capital expenditures, citing the Canadian government’s lifting of the 25 per cent foreign vessel import duty as a prime example.

“When the Canadian federal government lifted the 25 per cent import duty on foreign-built vessels in 2010, it opened the door for investment by domestic ship owners,” said Allister Paterson, president of Montreal-based Canada Steamship Lines, Inc.

“More than $2 billion is now being spent on new ships and vessel upgrades to establish a more efficient, greener and safer Canadian-flag fleet,” said Paterson. “This not only benefits the North American mining, agricultural, construction and manufacturing industries that we serve, but also those who live in communities throughout the Great Lakes and St. Lawrence River region.”

The full results of the Infrastructure Investment Survey of the Great Lakes and St. Lawrence Seaway System can be downloaded at www.marinedelivers.com.