by Paul Wiseman And Joe Mandak, The Associated Press  November 3, 2016

Approximately 2.5 per cent of the American labour force is threatened as automated trucks, buses and cars quickly gain traction 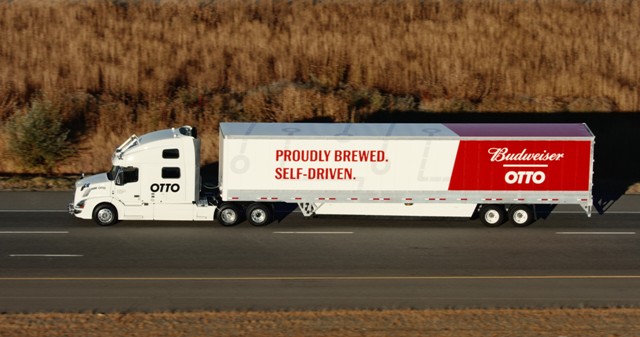 PITTSBURGH—Ronald De Feo has watched robots take factory jobs for years. Now he sees them threatening a new class of worker: People who drive for a living.

“I am in Pittsburgh; it’s a test market for Uber’s autonomous vehicle,” says De Feo, CEO of the industrial materials firm Kennametal. “We see all these (automated) Ubers running around the streets of Pittsburgh, a confusing and difficult place to navigate. If they can make that work, what do you think happens to the job of being a taxi driver?”

Computer scientists and economists say the threat isn’t merely theoretical: Automated cars pose an existential threat to the many Americans who drive for a living: 2.9 million truckers and delivery drivers, 674,000 bus drivers, 181,000 cab drivers and chauffeurs. Professional drivers make up about 2.5 per cent of the U.S. labour force, most recently pegged at around 160 million people.

The big question is how long it will take auto and tech companies to clear the technical hurdles to turning the streets over to driverless cars.

“I don’t see herds of robotic trucks running down the highway in the next few years,” says Vern Meyerotto, a 61-year-old truck driver in Denver. “There’s an awful lot of development that needs to be done on it.”

Meyerotto, who’s been driving since 2007, points to the self-driving Tesla Model S car that crashed in May, killing the driver, after the car’s cameras failed to detect a tractor-trailer crossing its path. He doesn’t expect to see robotic trucks doing much driving for 10 or 15 more years.

But the quick development of driverless cars has caught economists by surprise.

Assessing which jobs were vulnerable to robots in a 2004 book, economists Frank Levy of the Massachusetts Institute of Technology and Richard Murnane of Harvard University reckoned that truck drivers were safe. Surely, a machine couldn’t negotiate rush-hour traffic without a helping human hand.

Now, companies from Ford to Tesla to Uber are investing in automated car technology.

“The next big wave of automation will apply to driving,” says Moshe Vardi, a computer scientist at Rice University.

Vardi suspects that truck drivers will be the first victims. Automated trucks can be programmed to go from one warehouse to another, plying express lanes reserved for trucks that let them avoid interacting with human drivers.

Vardi notes that vulnerable truckers have much in common with the factory workers who’ve been ousted by machines over the past several decades: They tend to be white men, middle-aged or older, with high school-only educations—the people who’ve formed the core support for Donald Trump.

“These things do not happen without political consequences,” Vardi says.

Uber, which has been testing driverless taxis in Pittsburgh, disputes the notion that automated cars will cost the economy jobs.

For example: “Self-driving Ubers will be on the road 24 hours a day, which means they will need a lot more human maintenance.”

A 25-year veteran cabbie who goes by A. Tucker was sitting in his Peoples Cab outside the Wyndham Grand Hotel in Pittsburgh. He worked in a Jones & Laughlin steel mill for six years before he was laid off and started driving a cab. He said he fears that driverless cars will eventually compete with guys like him.

“If you flip the coin to the other side, it was like the steel industry,” Tucker said. “We thought we would never lose our jobs to automation. But we lost our jobs, and many of us are driving cabs now.”

Cab drivers have been forced to become more professional, tech-savvy and educated to compete, because they now use tablet computers, credit card processors and GPS, Tucker said.

“Change is inevitable, whether we like it or not,” he said. “That’s life on the Earth moving forward.”

Some drivers are responding to the threat with grim humour. Upon hearing that a driverless truck had crossed Colorado with a load of beer last week, one commentator on the online Truckers Forum posted a reference to the killer computer network in the Terminator movies: