Canadian Pacific Railway CEO says rail sector is "...approaching a time where none of this works" 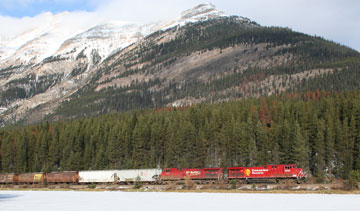 CALGARY—Mergers among the top North American railways may be possible if they are structured so that they won’t hurt customers, the chief executive of Canadian Pacific Railway Ltd. says.

CP chief executive Hunter Harrison said much has changed in the industry since the U.S. Surface Transportation Board last weighed major mergers in the late 1990s and the regulator may accept a deal if they wouldn’t limit competition or hurt service.

Harrison noted that each merger is unique and how customers fare often depends on how well such a combination is executed.

The railway confirmed October 20 that “exploratory” discussions with CSX Corp. regarding a possible deal to join forces ended without a deal and with no plans to revive them.

A merger between the companies would have created a railway capable of moving crude from North Dakota’s burgeoning oilfields to refineries in the eastern United States.

Some have suggested that a link-up between the two railways would be a non-starter because of U.S. regulatory hurdles.

“We did not make an offer to CSX. We contacted CSX, had a dialogue with them and asked them if they would be interested in exploring opportunities that we both might share,” said Harrison, the Memphis-born veteran railroader.

CSX indicated that it would be interested in discussing the idea and representatives from the two railroads met three or four times, said Harrison, who took issue with the characterization that CP was rebuffed.

“We had some fascinating conversations about the potential, but it became evident that we saw the world a little differently, which is fine.”

Harrison said he couldn’t contemplate a hostile bid for CSX working in the current environment, as both sides would need to be pulling in the same direction to get regulators on side.

In any event, Harrison said the status quo is unacceptable and mergers are a possible solution.

A not-in-my-backyard attitude is preventing new rail lines from being built to accommodate surging volumes of oil, grain and other commodities. At the same time, trains have been forced to reduce their speeds following a spate of high-profile derailments, including the deadly one in Lac Megantic, Que., in July 2013. The perennially congested Chicago rail hub is in a “fragile” state that could easily come to a standstill in the event of another bad winter.

“We are approaching a time where none of this works,” said Harrison. Putting two carriers together would free up capacity in the system through better co-ordination, he said.

But Harrison said CP itself in good shape with or without a deal.

Earlier Tuesday, the railroad posted a third-quarter profit of $400 million, up from $324 million a year earlier. Revenues rose nine per cent to $1.67 billion for the three-month period from $1.53 billion a year ago.

The company’s operating ratio—a closely watched measure of efficiency—improved more than expected to a record low of 62.8 per cent.

Earlier this month, Canadian Pacific said its goal is to double its profits and drive its revenues to $10 billion during the next four years. The benefits of a potential merger with another railroad would just be gravy, said Harrison.

“We’re happy. We’ve got a franchise that’s going well. It’s humming. It’s producing results. It’s created a hell of a lot of shareholder value. It’s throwing off cash. It’s doing all the things we want it to do,” said Harrison.

CP isn’t looking for another deal to replace the one it hoped to do with CSX.

“I will not, in my role as CEO, as long as I’ve got that role, allow us to fall in love with some deal and cause some deterioration of shareholder value,” said Harrison.

“If somebody picks up the phone and calls us and says ‘would you like to explore some opportunities’ yeah, I’ll listen to them. A lot of it is going to have do with what the price is and what it does for the shareholder.”

And Harrison stressed that his legacy at CP has nothing to do with his view on mergers. His contract is set to end in 2017, after which point chief operating officer Keith Creel has been tapped take the helm.