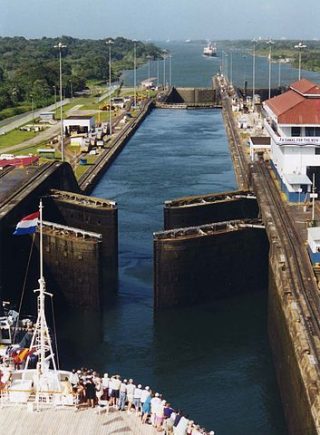 The Gatun Locks, part of the original canal, which opened in 1914. PHOTO: Stan Shebs, via Wikimedia Commons

PANAMA CITY—The Panama Canal is taking reservations for ships to transit its new locks starting June 27, the day after the inauguration of a $5.25 billion project to double the waterway’s capacity, authorities said Monday.

The Panama Canal Authority said it processed 25 slots in the first hours since reservations opened. Four per day are reserved for super-large “New Panamax” vessels, as are the usual 25 a day for “Panamax” ships that pass through the old locks.

The first commercial slot went to a Japanese vessel carrying liquefied natural gas. Gas shipping between Asia and the United States is one of the new businesses that canal authorities are targeting with the expansion.

Canal administrator Jorge Luis Quijano said officials were pleased with the initial response and hope more and more ships will pass through the canal. The original canal opened to traffic in 1914, drastically cutting travel times for a large number of shipping routes worldwide. As vastly larger ships have been introduced, however, operators have been forced to widen the canal in order to accommodate the largest vessels.

The inaugural passage through the expanded canal is scheduled for June 26.