Muck and debris downed power lines and made road and rail lines in the Fraser Valley impassable. Crews don't expect to give the all-clear until the weekend 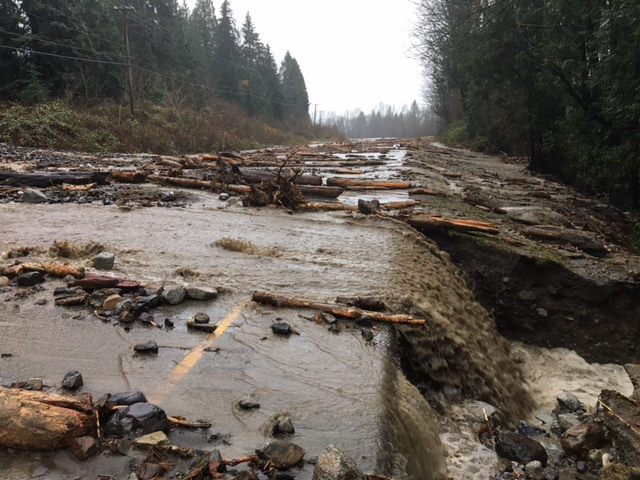 The muck and debris is creating delays for both drivers and rail traffic traveling in or out of Vancouver. PHOTO: B.C. Ministry of Transportion/Flickr

VANCOUVER—A series of mudslides that rolled over Highway 1 in British Columbia’s eastern Fraser Valley won’t be completely cleared away until Saturday, the Transportation Ministry said.

The muck and debris is creating delays for both drivers and rail traffic.

“It’s a fairly long stretch of the highway and I understand there were five separate points where there was a mudslide on that road,” she said.

Kinneman said the nearby Popkum Fire Department responded to the first calls for help because some drivers and passengers in vehicles were stranded by debris or power lines that had come down.

An RCMP news release said there were no injuries reported.

The Transportation Ministry said in a statement late Thursday that geotechnical engineers have completed their review of the area and crews with heavy equipment were beginning to clear away large amounts of debris covering the highway in both directions.

“Crews will be focused on clearing the westbound lanes first to re-open the highway and establish a counterflow traffic movement on the west side of the highway,” the statement says.

While the ministry estimates the westbound lanes will be clear by around noon on Friday, the statement says the eastbound portion of the highway may not be open until Saturday afternoon.

The slide has also impacted Canadian National Railway traffic that runs beside the highway and while some trains are still moving, there have been delays.

A CN spokeswoman said rail crews were on the scene clearing debris from the tracks and are expecting to work through the night.

A detour is available via Highways 7 and 9 through Agassiz and the lines were long on the route on Thursday afternoon.

Environment Canada lifted a rainfall warning on Thursday for eastern sections of the Fraser Valley that had been deluged with rain over the past several days.

A mudslide also closed Highway 40 west of Lillooet on Thursday, but it was reopened by late afternoon.