Canada's freight rail firms are promising new trains, cars and staff as grain farmers are anxious to avoid a repeat of last winter, when backlogs cost them millions 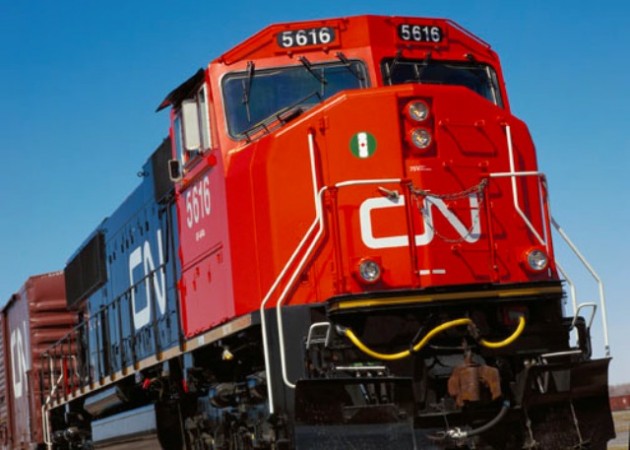 Legislation passed in May is giving CN an extra push to improve service. PHOTO: CN

SASKATOON—They’re not guaranteeing improved grain transportation by this winter, but Canada’s two biggest railways say they believe new locomotives, hopper cars and extra staff will make a difference getting crops to market in the months ahead.

That was the message Canadian Pacific and Canadian National railways presented Wednesday in Saskatoon at a meeting with farm groups, grain industry officials and members of the federal cabinet.

The meeting was requested by Transport Minister Marc Garneau, who says he wants to avoid a repeat of last winter’s grain-shipping backlog that farmers have said cost them millions of dollars in lost income.

Jean-Jacques Ruest, president and CEO of CN Rail, says his company is buying more cars and locomotives, hiring and training extra crews and adding track to move a greater volume of grain.

Rival Canadian Pacific Railway Ltd. said earlier this year that it expected to order a total of about 5,900 grain hoppers over the next four years.

Federal Agriculture and Agri-Food Minister Lawrence MacAulay says he thinks there will be more meetings to discuss improvements to the grain transportation system.

“Everybody wants it to work and if you work together, it will work a lot better and that’s basically what happened here today,” said MacAulay.

The gathering coincided with the federal Liberal caucus meeting in Saskatoon and followed May’s passage in Parliament of the Transportation Modernization Act.

Both CN and CP have said their new equipment orders were brought about by the changes that encourage them to make investments to avert service disruptions.

“All these things take time but we will have a lot of these resources before entering the coming winter,” said Ruest.

He pointed to reports of Australian crop failures that might provide openings for Canadian producers.

“I think we’ve got to be light on our feet as far as transportation and getting the crop to where it’s needed in the right place and the right time. Hopefully we’re headed that way,” Lewis said.

Kevin Hursh, executive director of the Inland Terminal Association of Canada, said elevator companies sell grain based on the portion of hopper cars committed to them, but trouble surfaces if their expectations aren’t met.

“When that falls short … they’ve got sales that they can’t meet,” he said.

Hursh noted that CN will have more grain to move this crop year than CP because drought conditions reduced yields in southern areas of the Prairies where CP is the main carrier.

Garneau said there would be less of a challenge if the industry could predict yields, market prices and the severity of winter weather, which alone proved to be troublesome for the railways last winter.

“What we do want to make sure is in place is a grain transportation system that’s as reliable as possible to get grain to market,” he said. (CJWW, The Canadian Press)