Hedley Ryland, the mayor of L'Anse-au-Loup, N.L., says there are so many holes along a 44-km stretch of highway that local garages are making a fortune repairing bent rims and damaged suspensions 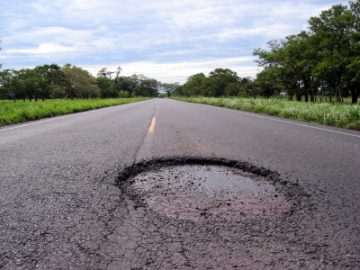 L’ANSE-AU-LOUP, N.L.—The mayor of a small town in southern Labrador says he has grown so frustrated with the potholes in the Trans-Labrador Highway that he is openly advocating for his town to become part of Quebec.

“All we’ve got to do is move the border, pave our roads and we’re there,” Hedley Ryland, mayor of L’Anse-au-Loup, said in an interview July 24.

He has taken part in a series of roadside protests, which on Monday included blockades of the local highway maintenance depot and the office of the area’s member of the legislature.

“We won’t drive in the nighttime when it’s dark and there’s fog,” Ryland said. “We’d be down in a pothole, and have blowouts … It is absolutely dangerous. It is not a road issue now. It is a safety issue.”

During this past weekend, about 100 local protesters gathered along the highway near the Quebec border, where they delayed all commercial vehicles as police looked on, he said.

“This is just a start,” the mayor said. “We’re going to continue until we get answers.”

Photos taken Monday from outside the constituency office of Lisa Dempster, the Liberal member for Cartwright-L’Anse-au-Clair, show a handful of protesters standing next to hand-painted placards. One of them reads: “Power of the people is stronger than the people in power.”

Ryland said there are so many holes along a 44-kilometre section of the highway that local garages are making a fortune repairing bent rims and damaged suspensions.

The province recently committed to fixing an 11-kilometre section, but Ryland said the protests won’t stop until Premier Dwight Ball agrees to fill the holes along a 20-kilometre portion that stretches from the Quebec border to Ryland’s community of 700.

“We said 11 kilometres is not enough,” he said, adding that the extra work would probably cost about $1 million. “We’re being treated as second-class citizens.”

Transportation Minister Al Hawkins could not be immediately reached for comment. However, a spokeswoman for the Newfoundland and Labrador government said provincial officials met with local representatives on July 10 to explain how the province would deal with the most “troublesome” stretches of the highway.

Ryland said he’s in favour of having his town join Quebec because the highway on the other side of the border is in much better shape—and most of the area’s health-care and shopping needs are already handled in the neighbouring province.

The 60-year-old mayor, who has lived in L’Anse-au-Loup all his life, said there is a five-year plan in the works to pave the Trans-Labrador Highway, from the Quebec border to Happy Valley-Goose Bay _ a distance of more than 600 kilometres. But he said it’s not clear when that will start.

Ryland said if the section near his town isn’t repaired by September, he will keep all school buses off the road for safety reasons.

Heavy truck traffic has largely destroyed the highway, with most of the big rigs headed to and from the Muskrat Falls hydroelectric construction project in central Labrador using the roadway, he said.

The mayor hinted that plans are in the works for some kind of rally that will call for the separation of Labrador from Newfoundland, though he didn’t offer details.

“We will hire constitutional lawyers, and we will travel to Ottawa,” he said. “If the day comes and … we will form our own territorial status, I will die a happy man knowing that I fought for our youth of today, and our youth of tomorrow.”