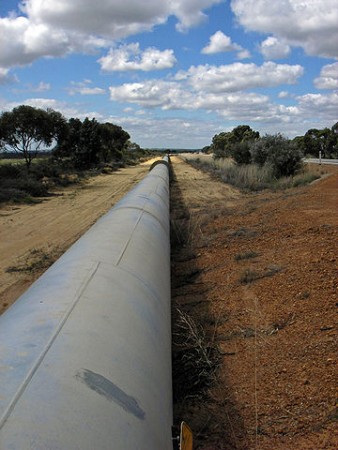 The National Energy Board audit provides new ammunition for a range of pipeline safety critics. PHOTO: SeanMack, via Wikimedia Commons

OTTAWA—The Liberal government is promising “instant action” by the National Energy Board and a new environmental review process within days in the face of a damning audit that found the arms-length board fails to properly track pipeline approval conditions or follow up on compliance problems.

Natural Resources Minister Jim Carr has been under heavy opposition fire in the House of Commons for two straight days with stalled pipeline megaprojects threatening to divide the country along regional lines.

A report tabled Tuesday by federal environment commissioner Julie Gelfand only added to the barrage.

Gelfand’s audit determined the Calgary-based NEB isn’t adequately checking to ensure that some 73,000 kilometres of existing oil and gas pipelines being run by about 100 companies are operating safely.

The report landed as Prime Minister Justin Trudeau was in Montreal meeting Mayor Denis Coderre, who led a coalition of Montreal-area municipal leaders last week in opposing the proposed Energy East pipeline project over what they see as environmental concerns.

Gelfand’s report will do little to reassure pipeline skeptics.

The audit checked 49 pipeline approval conditions and found 24 in which key documentation was missing, inaccurate or lacked an analysis or conclusion.

“These are conditions the NEB sets for pipeline approvals and it’s their job to make sure those conditions are complied with. That is their job,” Gelfand said at a news conference.

“My job is to provide you with information on how well they’re doing their job. And I would say, for now, with a 50 per cent success rate, well, those are the facts and now it’s up to Canadians, its up to members of Parliament, to decide what the next steps should be.”

Asked whether the energy board’s failure to track compliance equates to a failure of enforcement, Gelfand responded: “That’s a great question.”

NEB chairman Peter Watson issued a release stating the board “absolutely enforces and monitors all companies’ compliance with pipeline approval conditions,” while promising to follow all Gelfand’s audit recommendations.

The audit spilled into Parliament’s daily question period, where Carr told the Commons he’d spoken with the NEB chair and was assured “there will be instant action. In fact, it started actually quite some time ago.”

New Democrats demanded to know whether the Liberals would make good on a campaign promise to force pipeline projects that are currently under NEB review to undergo a more rigorous environmental assessment, but government ministers dodged a direct response.

Carr did affirm that an announcement of a transitional review process is imminent: “I can now say it will be in a number of days.”

And Environment Minister Catherine McKenna assured the House that project assessments will begin to take into account climate change impacts.

NDP critic Nathan Cullen said the NEB audit calls into question the whole system, leaving Canadians with no confidence that conditions set by the board in order for a pipeline to safely proceed will actually be checked.

Last week, municipal leaders from more than 80 Montreal-area communities publicly opposed TransCanada’s Energy East pipeline, which proposes to carry Alberta and Saskatchewan bitumen to ports and refineries in New Brunswick. Their opposition set off a firestorm in western Canada, which has seen sharp opposition to all new or expanded pipeline routes to tidewater.

Trudeau emerged from Tuesday’s meeting with Coderre to say energy companies will get a chance to prove to cities and towns across the country that a project is in their best interests under a revamped review process.

The audit report from the commissioner of the environment and sustainable development notes that federally regulated pipelines moved about $162 billion worth of oil and gas in 2014 to Canadian and international markets. It also observes that several proposed new pipelines, if all approved, would nearly double existing pipeline capacity by 2020, while investing about $25 billion in project development.

Gelfand’s report says the energy board needs to do more to recruit and retain specialists—a task that may be made easier given current massive job losses in the oil and gas sector due to plunging world oil prices.