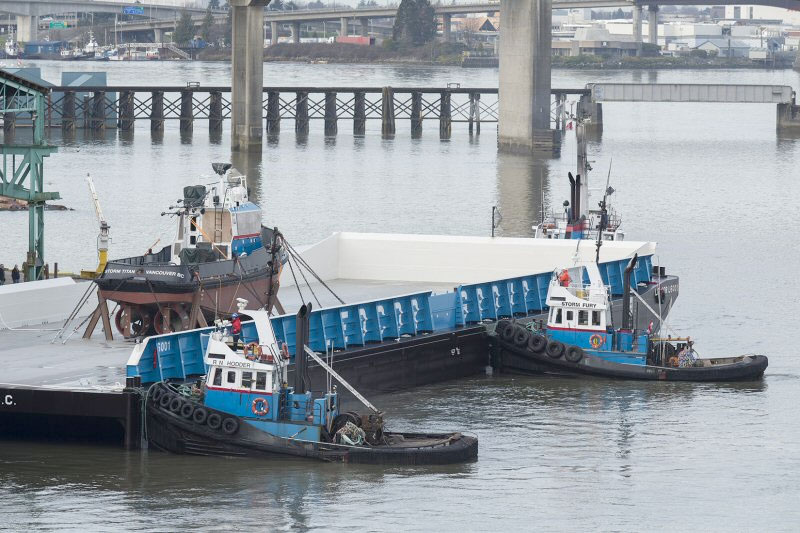 plans to nearly double its 2012 fleet size by 2016. PHOTO: Ledcor Group of Companies

The new boats are part of Ledcor’s marine division’s plans to add three tugboats and eight barges, growing its current fleet to nine tug boats and 23 barges within the year.

The 80-metre barges, which have a deck strength of higher than 3,000 lbs/sq.ft, will carry a wide variety of cargoes, including bulk commodities, containers, equipment modules, and construction materials such as pipe.

But Ledcor is looking ahead with this expansion: If any LNG plants are constructed in the province, the barges would be very effective during the construction phase to provide transportation of equipment and materials to remote sites.

“The new tug and barge assets allow us to meet our current and future customers’ needs as Ledcor continues to expand its service offerings in British Columbia,” said Mark Houghton, Chief Operating Officer for Ledcor’s Marine division. “We are well positioned to seize new opportunities and ship diverse types of cargo with these two new barges.”

The tug boat, named the Bill L Ledcor after the Ledcor Group’s founder, produces 1,200 horsepower and is able to successfully single or double tow Ledcor wood product and aggregate barges as well as the new 80 metre barges. To fulfill current capacity demands, the tugboat will be used for inland services, specifically trips along the Fraser River.

“Our expansion creates business diversification for Ledcor and brings new jobs and economic opportunities to the marine industry,” said Paul McElligott, President, Ledcor Transportation and Resources, the Marine division’s parent company. “We are uniquely positioned to provide customers with modern new equipment, competitive rates, and a dedication to customer service and will continue growing our business this way.”

The Ledcor Group of Companies is a diversified construction firm serving the building, oil & gas, infrastructure, mining, power and communications sectors. It employs 8000 people in 20 locations across North America.