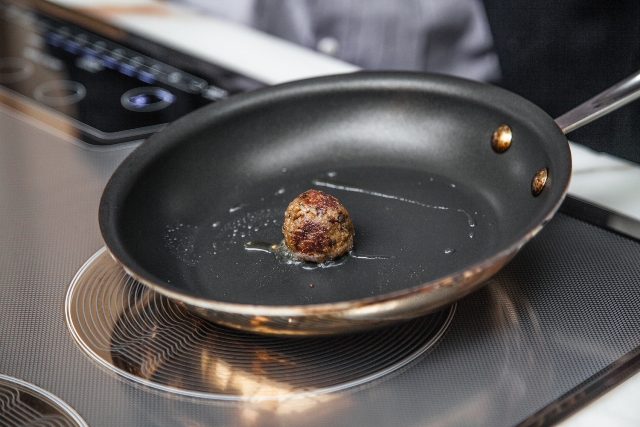 The “world’s first” cultured meatball. The startup says it can produce meat in the lab while generating 90 per cent fewer greenhouse gas emissions than traditional animal agriculture. PHOTO: Memphis Meats

SAN FRANCISCO—It’s not really from Memphis, but technically speaking, it is meat—and one fledgling California firm wants to bring it from their laboratory farm to your plate.

Memphis Meats, a startup based in San Francisco, is preparing to turn the millenniums-old meat farming industry on its head. The company will make its global debut Feb. 4 in its hometown on the U.S. west coast, and its founders plan to have lab-grown meat on tables across the country within five years.

“This is absolutely the future of meat,” Uma Valeti, the company’s CEO, as well as a trained cardiologist, said. “We plan to do to the meat industry what the car did to the horse and buggy. Cultured meat will completely replace the status quo and make raising animals to eat them simply unthinkable.”

As a number of companies begin competing for a place at the cultured meat table, Memphis Meats says it is already growing real meat in small quantities using cells from pigs, chickens and cows. The lab-meat race hit the mainstream several years ago when Google co-founder, Sergey Brin, turned up the heat by providing $330,000 to fund the world’s first cultured hamburger.

Founded by Valeti, stem cell biologist Nicholas Genovese and biomedical engineer Will Clem—who provided the Memphis connection with his ownership of a chain of Tennessee barbeque joints—the startup will pitch its audacious business plan to a group of venture capitalists at San Francisco biotech accelerator Indie Bio this week. The company said it is already beginning to close in on raising $2 million in its initial round of venture financing.

“While generating one calorie from beef requires 23 calories in feed, Memphis Meats plans to produce a calorie of meat from just three calories in inputs,” the startup said. “The company’s products will be free of antibiotics, fecal matter, pathogens, and other contaminants found in conventional meat.”

With enormous supply chains involved in getting Canadian meat from the farm to plates across the country and around the world, the potentially game-changing technology could have broad implications—and if the company’s ambitious timeline proves realistic, it will happen sooner than most observers expected.

A look at the world’s first cultured meatball: