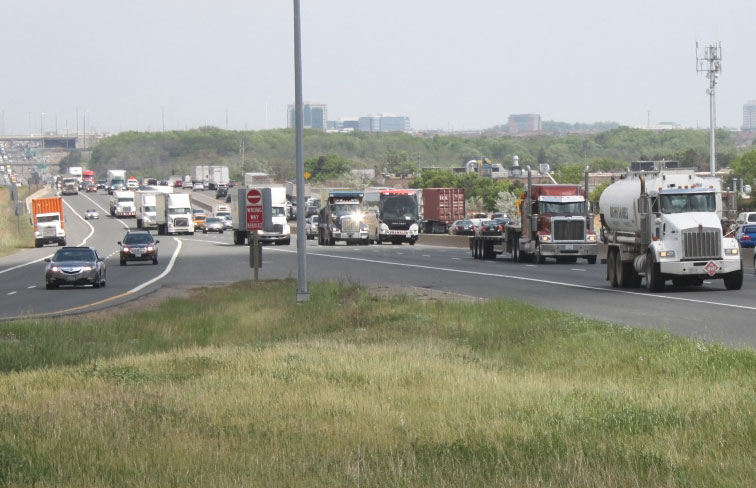 A local business is fighting to get the 401 expansion to include a bridge that would level the grade of a 3.5 km stretch between Mississauga Rd. and Mavis Rd. PHOTO: Jeff Wimbush

MISSISSAUGA, Ont.—Construction is about to begin on a project to widen a stretch of Highway 401 through Mississauga, Ont., despite the efforts of a local manufacturer to get the province to fix a major design flaw.

Ernie Lynch, founder of Mississauga-based manufacturer Lynch Fluid Controls, says the planned improvements do not address a problem that bogs down transport, hurts the efficiency of hundreds of businesses, contributes to carbon emissions and wastes $200 million in fuel every year.

The project will widen a seven-kilometer stretch of the 401 between the 403/410 interchange and the Credit River. The plans involve converting the six lane freeway to a 12 lane collector/express configuration. The Transportation Environmental Study Report (TESR) identifies the highway as a key economic corridor, and the project’s goal is to alleviate traffic congestion.

Frequent traffic jams occur around the Credit Valley, where the highway rises and dips as it follows natural grade and elevation changes of approximately 20 vertical meters. According to Lynch, the reason for the congestion is drivers can’t see the traffic conditions ahead past the hills, so they put on the breaks.

Lynch said this causes major slowdowns as transport trucks are forced to reduce their speed to a crawl or a dead stop. As they proceed in stop-and-go traffic across the flood plain and ascend the other side of the valley, slightly faster trucks use the center lane to keep moving.

“They’re not all created equal. Some trucks, it will take them over a kilometer just to get up to speed. And they are going dead slow. Other ones are faster—some are empty—and they start to get into the middle lane.”

The result is all car traffic is forced into the one remaining lane. Lynch said he’s seen commuters have to drive past their exit because they couldn’t get through the wall of transport trucks.
As a director with the Ontario Aerospace Council and a member of the Small and Medium-Sized Enterprises (SME) Advisory Board to the Minister of International Trade, Lynch has experience advocating for transportation and environmental improvements.

For the last two years he has fought to get the 401 project to include a bridge that would level the grade of a 3.5 km stretch between Mississauga Rd. and Mavis Rd. He said this will alleviate the frequent traffic jams and speed up the movement of goods and people—making businesses more efficient and competitive.

“We’re supposed to be getting more efficient, and efficiency doesn’t just happen on the factory floor. Lean manufacturing has to extend to the outside world too, and the infrastructure that feeds and supports the factory effort.”

MP Brad Butt, who represents Mississauga-Streetsville, said there’s no question that the rolling grade of the highway is the cause of traffic problems.

“If they leveled out that section of the 401 it would save commuter time, it would save wear and tear on trucks and cars, and it would absolutely speed up the flow of traffic.”

Butt said he gives Lynch a lot of credit for identifying the problem and spending his personal time speaking to the right people to get something done.

However, Lynch found it can be difficult to get those people to listen. He describes the problems his latest efforts have faced as “political pinball.”

Lynch set up a meeting with three MTO engineers last March to make his proposal. The MTO reported they are going ahead with the original plan. Their reasons included the additional costs for construction and maintenance.

MTO spokesperson Astrid Poei provided a statement estimating the additional cost would be “in the realm of $2 billion.” Lynch said that figure is inaccurate, because the MTO misunderstood his proposal from the beginning. He said in addition to the section he identified, they must have applied his idea to the entire length of the highway project to come up with such a high number. Lynch said the actual cost of his plan would likely be closer to $500 million.

In response, Poei’s statement reported the MTO “fully understands the proposal” and stands by their original estimate.

To help pay for the project, Butt said it could be eligible for federal funding.

“If the province decided this was a project they wanted to do, they could apply for federal infrastructure money to help offset some of the costs.”

According to Infrastructure Canada’s website, generally one-third of the cost can be covered by federal funding, and the maximum federal contribution for any single project is 50 per cent.

Lynch said the potential gains in efficiency are well worth the initial cost. At a Peel Goods Movement Task Force event hosted in partnership with Metrolinx last June, Lynch made a presentation that pointed out with 400,000 trips per day on Highway 401, if just one litre were saved per trip at the price of $1.40 per litre, $204 million could saved.

After the MTO’s rejection, and several responses in writing, Lynch said they stopped returning his calls.

He tried to take his proposal to Premier Kathleen Wynne, but was disappointed when the Premier’s office directed him back to the Ministry of Transportation (MTO).
“I think she should have given us audience and at least listen to what the issue was instead of just brushing it off.”

Later, he tried contacting Brad Duguid, Minister of Economic Development, Employment and Infrastructure. The ministry directed him to the MTO again.

In an emailed statement, Minister Duguid’s office said they connected Lynch with a policy advisor to Transportation Minister Del Duca, because the issue falls entirely under MTO’s jurisdiction.
Lynch said the MTO is not listening, and won’t grant him a meeting with the Minister of Transportation. He thinks his pleas will be ignored unless one of the Ministers or the Premier meets with him and decides to take the lead.

Besides the cost, another reason the MTO reported for rejecting the proposal was they were too far along in the planning process. The Environmental Assessment (EA) was approved in 2007, and a second study wrapped up in 2013.

Lynch said he missed out on the initial planning stages because he was unaware of the project.

According to the MTO, notice was provided through newspaper ads, brochures mailed to businesses and residences abutting the project area, contacting of review agencies and interest groups, and four public information centres (PIC) held between 2003 and 2013.

Lynch said EAs need to be more widely publicized. Judging by the recorded attendance to the PICs, he may be right. The reports show three people attended the first PIC held in 2003, “over 20” attended a 2004 meeting, and 26 attended a meeting in 2013.

“If more knew about it, I think every business in the area would be all over it.”

Butt said the decision is ultimately the provinces’ to make, and the federal government has no jurisdiction. While he thinks the idea’s merits are undeniable, it’s a question of the MTO’s priorities.

Lynch said that is part of the problem, because the corridor is of major importance to Eastern Canada as a gateway to and from the U.S. Midwest.

“We’re leaving the responsibility up to the province, and the province’s decision on how to build it is based on elections, and whether they’re going to fit it in the budget.
“The government is not diving deep enough into how big of an impact it makes on all of us, both residents and business people.”

The MTO says its top priority is keeping people and goods moving safely and efficiently. Their highway improvement plan can be completed much quicker than Lynch’s proposal, because building a level roadway would require another EA.

Lynch described the area is a vital artery for the movement of people, raw materials and finished goods, and stressed the importance of getting it right this time.
“We are looking at a piece of infrastructure that’s going to be here for 50 years before anything can be done about it.”

Though Lynch is not one to give up easily, he said at this point his efforts have hit a brick wall. It looks as though the project will go ahead as the MTO originally planned. Lynch said construction crews have been rebuilding a bridge at Mavis Road, to make room for the extra lanes. The project is expected to begin in 2016, and be completed in three years.

Jeff Wimbush is a freelance business writer in Toronto