Officials considered a number of extreme options, planning for the worst as the fire known as The Beast took as many as 1.5 million barrels a day of oilsands production offline 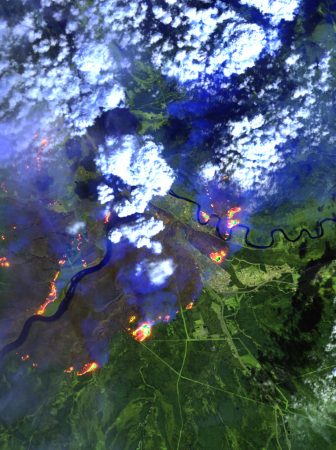 CALGARY—Federal officials raised the possibility of relaxing competition and fuel quality rules to ensure a stable supply of fuel while the Fort McMurray wildfire raged and forced several northern Alberta oilsands projects to shut down.

Documents obtained by The Canadian Press under the Access to Information Act highlight some of the options Ottawa was examining if shortages got bad enough during Canada’s most expensive natural disaster, which drove more than 80,000 Fort McMurray residents from their homes for a month or more in May 2016.

A May 10 “update on energy operations” sent to Natural Resources Canada staff noted as many as 1.5 million barrels a day of oilsands production were offline.

“Companies have reported that fuel inventories remain adequate, but steps are being taken to source alternative supplies from outside the region to supplement current supplies,” the document said.

The note said Natural Resources Canada was working with the Environment, Justice and Innovation, Science and Economic Development ministries to explore a process to respond to any potential requests of that nature.

It didn’t end up coming to that.

A Natural Resources spokeswoman said no industry players made such requests and representatives from Alberta’s three biggest refiners—Suncor Energy, Imperial Oil and Shell Canada—confirmed they did not ask.

Under the Competition Act, it is illegal for competitors to work in concert on price setting, market allocation and supply restriction.

Competition Bureau enforcement guidelines say the sharing of competitively sensitive information can be a concern.

“An agreement to disclose or exchange information that is important to competitive rivalry between the parties can result in a substantial lessening or prevention of competition,” says a 2009 document setting out competitor collaboration guidelines.

“Our supply group worked tirelessly to serve our customers and the community during one of the worst natural disasters in Alberta’s history,” she said in an email.

“Thanks to their hard work, we were able to leverage Shell’s North American-wide trading network to help limit the impact of inventory shortages at the pumps, both in critical markets like Fort McMurray where emergency services needed fuel to continue their work, and in other customer markets as well.”

There was very little supply disruption at Shell, aside from some minor shortages in Edmonton, said Lemay.

It was a tougher situation for Suncor. In early June 2016, Suncor’s Petro-Canada branded stations in Western Canada ran out of fuel due to the ongoing impact of the wildfires and an outage at its Edmonton refinery.

A Natural Resources Canada “situation report” dated May 7, 2016, said refineries had anywhere between seven to 14 days worth of crude supply available.

But it cautioned “this situation could change quickly” for companies whose refineries rely on crude from their own oilsands mining operations.

“In such cases, alternative sources of crude supply are being sought, but harder to come by as most producers are operating at reduced levels of output,” the report said.

“Some third-party suppliers have been reduced to 90 per cent of their regular allocations in the Edmonton market as a precaution to conserve supplies until there is more market certainty. Refineries are also reporting holding back regular deliveries to markets where supplies are plentiful and importing in markets (such as Vancouver) where this is an option to conserve supplies.”

Some players were using rail and truck to get fuel to markets like Calgary and Winnipeg, the report said.

“Airlines have also been asked to seek options for refuel outside of Western Canada where feasible.”

Dan McTeague, an analyst at fuel-price tracking website Gasbuddy.com and a former Liberal MP, said he can’t think of a time when Canada has had to roll back Competition Act or fuel quality rules in the face of a crisis.

But he said he wouldn’t be surprised if authorities were close to having to make a call like that during the Fort McMurray disaster, he said.

“There’s no doubt that this was a very desperate situation, a very desperate time that required unusual consideration. We, at some points, did not think that there was going to be enough fuel to go around, let alone our obligations to the Americans,” he said.

“It looks like they were able to scramble and all’s well that ends well. I guess no one knew in the first few weeks how bad this was going to be or how quickly we would emerge from it.”