Canada to align itself with U.S. to cut pollution caused by cars, trucks and fuel 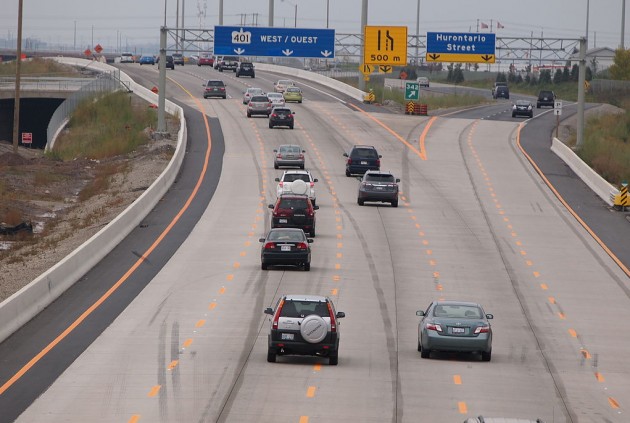 The new standards are designed to cut down on air pollution caused by vehicles on Canada’s roads. PHOTO: Ryan Stubbs, via Wikimedia Commons

OTTAWA—The Government of Canada has adopted stringent new standards for cleaner vehicles and fuels, aligning the country with the U.S. in an effort to cut air pollution from on-road vehicles. The move is part of an ongoing commitment to improve air quality for Canadians.

The government said Canada’s Tier 3 regulations will introduce more stringent air pollutant emission standards for new passenger cars, light-duty trucks and certain heavy-duty vehicles – such as delivery vans – starting with the 2017 model year. They will also lower limits on the allowable sulphur content of gasoline beginning in 2017, all moves that align Canadian standards with those of the United States.

“Our Government is continuing to move forward with responsible regulatory measures that reduce air pollution and greenhouse gas emissions from the transportation sector while maintaining Canada’s economic competitiveness and protecting good, high-paying jobs in sectors of the economy integrated with the United States,” Environment Minister, Leona Aglukkaq, said in a statement.

The transportation sector is currently responsible for nearly a quarter of Canadian greenhouse gas emissions and is a major source of smog-forming air pollutants.

Air pollutant emissions from vehicles and fuels have continued to decrease as a result of regulatory actions, however. Specifically, total emissions of nitrogen oxides and volatile organic compounds from passenger vehicles and light trucks operated on Canadian roads have decreased by almost 40 percent from 2006 to 2013.

By 2030, the government estimates the Tier 3 vehicle and fuel standards will result in cumulative health and environmental benefits of $7.5 billion and cumulative fuel and vehicle related costs of $2.7 billion. Accordingly, the projected benefits would exceed the projected costs by a ratio of almost three-to-one.

The projected health benefits from the Tier 3 vehicle and fuel standards are also significant. Between 2017 and 2030, it is estimated that reductions in air pollutants from vehicles will prevent about 1,400 premature deaths, nearly 200,000 days of asthma symptoms and 2.8 million days of acute respiratory problems in Canada.