"The new North is a lot different than the North Northern Transportation Co. started in," a company vice-president said, as the firm faces mounting debt 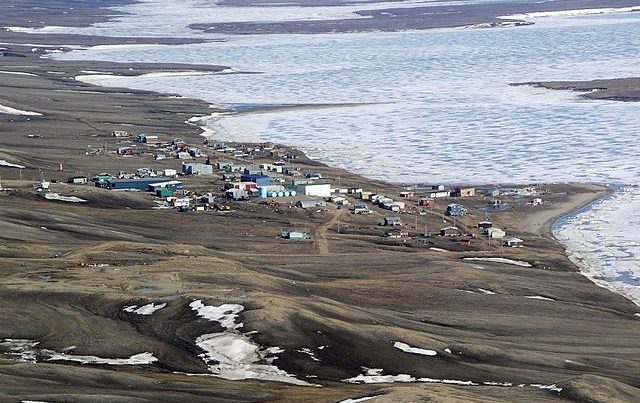 A number of small northern communities, including Sachs Harbour, N.W.T. are almost entirely reliant on the shipments. PHOTO: Timkal, via Wikimedia Commons

HAY RIVER, N.W.T.—For 80 years, Christmas in many remote communities of the western Arctic really should have been in the summer when the annual landing of the Northern Transportation Co.’s barge brought in supplies from new trucks to breakfast cereal.

“Everything,” is how Stephen Wylie, the administrator of Sachs Harbour on Banks Island, describes those loads.

He says this year’s sealift includes 12 months worth of diesel for the hamlet’s generator, 200 boxes of paper for its fax machine and 100 cases of pop for his family’s sweet tooth.

“That’s why we need a sealift.”

But the future is uncertain.

Northern Transportation, which delivered construction material to the Distant Early Warning system during the Cold War and the first drilling rig to Alaska’s Prudhoe Bay in 1963, is sinking in debt and faces the end of court-ordered bankruptcy protection on Sept. 22.

Owned by an Inuvialuit corporation, the company owes $130 million, most of it to a consortium of Canadian banks. It has issued layoff notices and, while it is living up to this year’s commitments, can’t say what will happen in 2017.

“A lot of the decisions are still before the courts,” says Mark Fleming, vice-president of Norterra, the Inuvialuit-owned holding company that owns Northern Transportation.

The transporter ships to 12 communities in Canada’s western Arctic, mostly up the Mackenzie River from its headquarters in Hay River, N.W.T. Combined with the once-booming Arctic oilpatch, it made for good business—until recently, says Fleming.

“The new North is a lot different than the North that NTCL started in.”

Climate change has lowered water levels on the Mackenzie. The oil and gas boom of the last decade has gone well and truly bust, reducing not only industrial customers but also household loads as people leave.

The increasing ease of using the Northwest Passage has added competition. All but four of the company’s Canadian destinations now have at least winter road access.

Northern Transportation has come to require subsidies of about $10 million a year from the banks through Norterra.

“That has racked up some debt to the company,” says Fleming.

In court documents, the transporter has acknowledged there are no buyers to keep it running.

John Vandenberg of the N.W.T. Public Works Department says some form of marine resupply will persist. For heavy construction materials or industrial equipment, barge transport is necessary, he says.

“The cost of air cargo would be very prohibitive.”

Other companies do run barges up the Mackenzie and there are sealift companies out of Montreal that sail the Arctic coast.

The territory has issued a call for proposals for 2017. The deadline was extended to Nov. 4 after potential bidders requested more time.

Fleming says the best bet would be a larger company able to use its tugs and barges for longer than the three or four months the Mackenzie allows.

“It would have the economies of scale to deploy these boats not only in the North, but in many of their other industries throughout the year, so they’re able to spread their costs over a longer period.”

Don’t look for government to step in, says Vandenberg.

“At this point, we believe the marketplace will provide a viable answer.”

Wylie just wants someone to make sure his community can still get what it needs.

He says Sachs Harbour’s dependence on the sealift is “100 per cent.” People ask him about it every day.