The project makes the northwest B.C. container terminal the second-largest in Canada and opens it to the biggest container ships on the seas 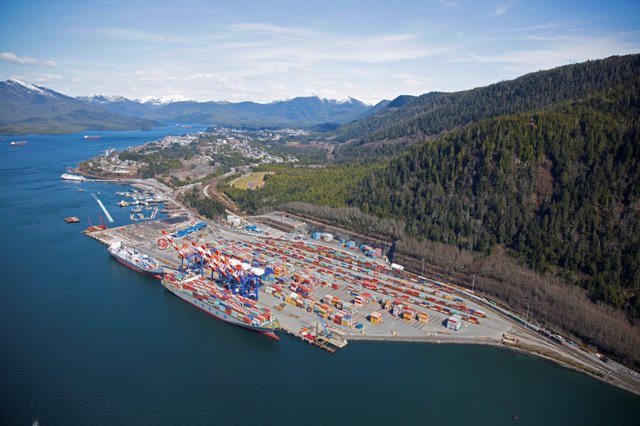 The container terminal was first converted from a break bulk cargo facility in 2007. PHOTO: Port of Prince Rupert/Twitter

The work at the Fairview Container Terminal in northwest B.C. took two years to complete and adds capacity for nearly a half-million more containers to move through the port each year.

The Port of Prince Rupert held an open house Aug. 29 to mark the opening of the expanded terminal, which is about 60 per cent larger and includes a second berth capable of serving the world’s largest container ships.

“This project is a significant addition to Canada’s trade infrastructure, and provides tremendous value to our shippers and many partners,” Don Krusel, the port’s president and CEO, said in a statement. “It has become a major contributor to the regional economy, and could not have been realized without collaboration and support of industry, labour, government, First Nations and our local communities.”

Financed by Dubai-based shipping firm DP World, the expansion includes new Malacca-max cranes and other necessary infrastructure, such as additional rail lines. Canadian National Railway, whose network terminates in Prince Rupert, is also a major partner on the project.

With capacity to handle 1.35 million twenty-foot equivalent units—compared to 850,000 previously—the facility is now the second-largest container terminal in Canada, trailing just the Port of Vancouver. It was first converted from a break bulk cargo facility to a container port in 2007.

The Port of Prince Rupert expects the project to create more than 200 new jobs as cargo volumes rise.