Trudeau scheduled to meet with Montreal mayor, who set off a firestorm of criticism last week by publicly opposing controversial pipeline 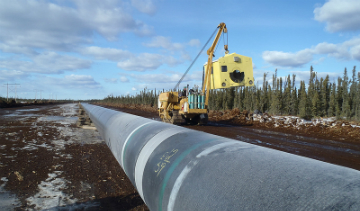 The new government is being pushed to lay out a coherent pipeline infrastructure framework as parliament resumes. PHOTO: Jason Woodhead, via Wikimedia Commons

OTTAWA—The politics of oil pipelines dominated a raucous return for parliamentarians Monday as the House of Commons resumed sitting under the new Liberal majority.

Prime Minister Justin Trudeau’s government sat for a week in December following the October election—long enough for a throne speech outlining government priorities and a bill to set in motion middle-class tax cuts—but the rubber truly hits the road over the next five months as opposition MPs work to impose themselves on the Liberals’ post-election honeymoon.

And when Montreal mayor Denis Coderre, a former Liberal cabinet minister and longtime organizer, fronted a group of Montreal municipal leaders last week who publicly oppose the proposed Energy East pipeline that would carry Alberta and Saskatchewan bitumen to New Brunswick, the sparks were cast for a good old national unity tire fire.

“I don’t want to do anything to foment this debate, because I’m hearing very disturbing things from a mayor of Montreal and then disturbing things from people reacting to that in western Canada,” said Ambrose. “That’s not what our country is about. And this is not a (pipeline) project that should divide the country.”

The Alberta MP sharpened her attacks later in the Commons as the 42nd Parliament got down to business.

Ambrose accused Trudeau of “swanning about Switzerland” with actors and billionaires at the World Economic Forum rather than attending to the country’s ailing economy.

“The prime minister should stop using the cell phone for selfies with Leo DiCaprio, pick it up and call Denis Coderre and fight for natural resources,” said Ambrose, adding almost 100,000 jobs have been lost in the resource sector due to plunging oil prices.

“Does the prime minister understand that his lack of leadership on this issue is creating divisions in the country?”

She demanded a public declaration of government support for the Energy East project.

Trudeau parried the initial Conservative queries by asserting that he recognizes the resourcefulness of Canada’s resource workers, but was eventually goaded into a sharp retort.

“It’s interesting that the members opposite are criticizing us for not getting done in 10 weeks what they were unable to do in 10 years,” Trudeau shot back at Ambrose.

And so it went.

NDP Leader Tom Mulcair wondered why the Liberals announced Monday they’ll sign on to the Trans Pacific Partnership trade agreement, negotiated by the previous Conservative government, after promising they would consult Canadians and Parliament first.

Trudeau replied that to not sign the agreement would effectively kill Canada’s participation, and that consultation would still take place before a decision on ratification.

About the only point of agreement came during the sombre moment of silence observed by all MPs for the victims of the La Loche, Sask., shootings before the daily question period began.

That, and a quick comment by Trudeau as he bolted up the stairs outside the Commons, concerning the need for a chat with the mayor of Montreal.

A spokeswoman said later that the meeting was previously scheduled and will occur Tuesday morning.

Coderre, for his part, rejected the role of country-wrecker over a pipeline project.

“I’ve been fighting for this country all my life, so nobody will give me lessons about national unity,” he said in Montreal.

“But it’s not at any cost that we have to take some projects.”