Execs at CN and CP not concerned about U.S. president-elect's threat to alter NAFTA yet, even see some upside from US$1T infrastructure pledge 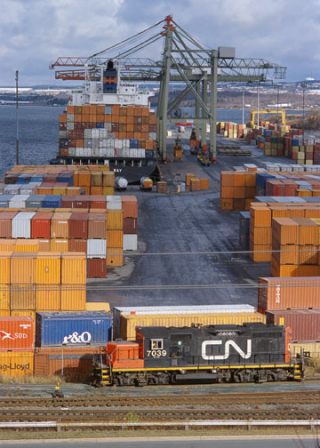 Despite concerns about NAFTA, CN and CP are positive on Trump’s presidency. PHOTO: CN

MONTREAL—Canada’s two largest railways are positive about the impact of a Donald Trump presidency despite some concern about the possibility of quotas being placed on lumber exports.

Senior executives from Canadian National and Canadian Pacific railways told a transportation conference Nov. 30 they’re not worried at this point about the U.S. president-elect’s threat to alter the North American Free Trade Agreement.

And he sees potential benefits if Trump moves forward with a US$1-trillion infrastructure program and cuts the U.S. corporate tax rate to 15 per cent.

A large stimulus program would increase demand for Canadian raw materials including aggregate, cement, steel and chemicals, helping the Calgary-based railway which derives 30 per cent to 35 per cent of its revenues from the United States.

“So we’re bullish on it in all honestly,” Creel told the Credit Suisse Industrials conference in Palm Beach, Fla.

“I think it’s going to be a good thing if he does what he said he’s going to do.”

He said the railway derives 15 per cent of its overall revenues from forestry products including shipments within Canada, to the U.S. and overseas.