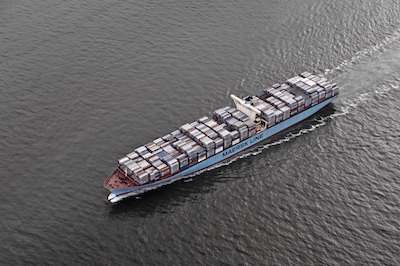 Shippers have long-hoped the Northwest Passage could become a viable alternative to transporting goods through the Suez and Panama canals. PHOTO: Maersk Group

CALGARY—Melting sea ice across Canada’s Arctic has had international shippers optimistic about finally opening up the fabled Northwest Passage to regular trade for more than a decade—but according to a new report, that optimism may not be entirely well-founded.

“Shipping may be more possible through the Northwest Passage than it was in the past, but it will not be consistently unobstructed,” said Hugh Stephens, the study’s author and executive fellow at the School of Public Policy at the University of Calgary.

According to the report, yearly fluctuations in ice coverage—which are normal—will make it difficult to establish a reliable route. The analysis concludes that even if the retreat of sea ice persists, the route across Northern Canada may still not be consistently ice-free for many more years, if ever.

“The challenges of ice combined with Arctic weather conditions may well mean that any shipping through the passage is slower than expected,” Stephens added. “Other complicating factors include uncharted or poorly charted sea lanes and the difficulty in securing insurance for Arctic shipping.”

The report also points to a lack of infrastructure in Canada’s Arctic and the expansion of the traditional routes—the Panama and Suez canals have each recently invested in expansions—as roadblocks to establishing a reliable new shipping channel.