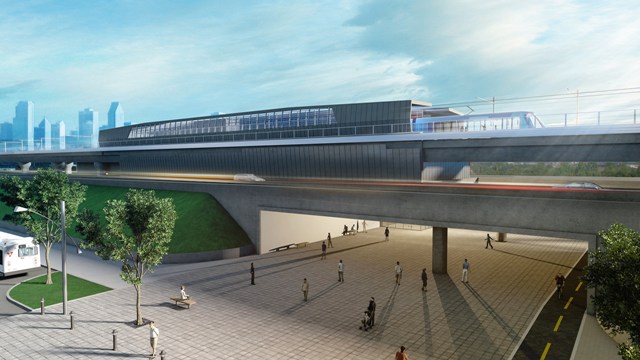 “Today we are proposing an innovative public transit solution that will improve the quality of life in Montréal and deliver important economic, social and environmental benefits. It will improve the metropolitan region’s overall competitiveness,” Michael Sabia, president and CEO of Caisse, said.

Click to enlarge | A map of the proposed transportation project. PHOTO: Caisse

“Much work remains to be done, but today we are unveiling a state-of-the-art solution,” Macky Tall, president and CEO of Caisse’s infrastructure division, said. “With highly frequent service, 20 hours a day, universal access and Wi-Fi available throughout the network, the REM promises to improve the daily commute of hundreds of thousands of people. We are committed to delivering the project on-time and on-budget.”

If built, the REM would become the third-largest automated transit system in the world, trailing only Dubai’s and Vancouver’s. It would also be the largest infrastructure project undertaken in Montreal since the inauguration of the city’s metro in 1966.

Caisse said the project will cost approximately $5.5 billion to build.

Pitching the project as an investment in the province, the pension fund said the LRT could add more than $3 billion to Quebec’s GDP over a four year period. During the construction phase alone, Caisse expects it would create approximately 7,500 jobs—as well as an estimated 1,000 permanent jobs when the transit system becomes operational. With congestion currently costing the province an estimated $1.4 billion, the new-age transit system would also ease traffic in the Montreal area.

Along with the economic benefits, Caisse touted the proposed transit network as a boon for the environmental. Running on electrified rails—and no doubt utilizing Quebec’s vast reserves of hydro power—the REM could eliminate the equivalent of 16,800 tonnes of carbon dioxide annually.

Caisse plans to submit the project for an environmental assessment by the summer. It said if all goes smoothly with provincial and federal regulators, construction on the REM could begin in the spring of next year. In that scenario, the first trains could be running throughout Montreal by 2020.

Along with the regulatory tangle, however, the project is contingent on infrastructure funding from Ottawa and Quebec City. Caisse said it would contribute $3 billion to the project—meaning the federal and Quebec governments would be required to invest the outstanding $2.5 billion.