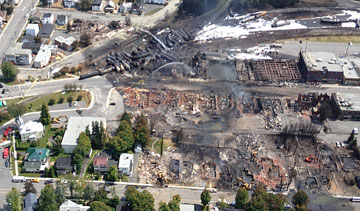 A train derailment and subsequent explosion leveled much of downtown Lac-Megantic, Que., July 6, 2013. PHOTO Transportation Safety Board of Canada

LAC-MEGANTIC, Que.—The reconstruction office in Lac-Megantic has officially opened its doors more than two and a half years after a 2013 train disaster destroyed much of the Quebec city’s core.

Its director says the office, which started operating in September, will help promoters with their projects and try to attract public and private investors to the city.

Stephane Lavallee says a hotel, community centre and social housing unit are among the projects being planned.

The amount is part of a $35 million federal fund announced in 2013 to help the city’s economic recovery.

The disaster was caused when a runaway train with oil tank cars derailed in July 2013, killing 47 people and causing raging fires.