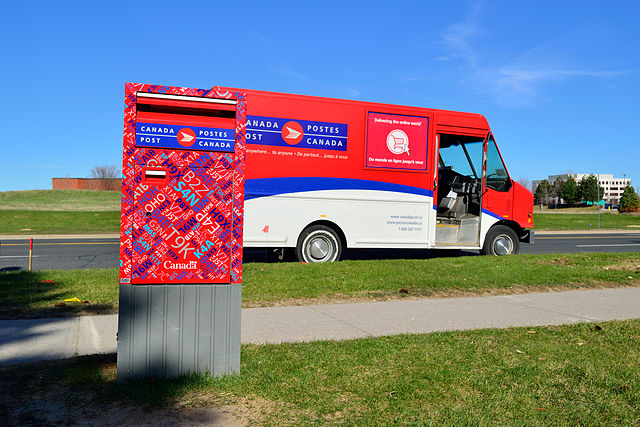 Without drastic changes to the national mail carrier, tax payers will be continually forced to porp it up, a new task force report says

And it says transformational changes are needed to prevent taxpayers from having to prop it up.

The four-member panel issued a discussion paper Sept. 12 that suggests a number of ways the letter carrier can turn its business model around, including distributing legalized marijuana, charging fees for door-to-door delivery and reverting to a move toward installing more community mail boxes.

A Commons committee has scheduled cross-country hearings this month to hear Canadians’ views of what they want from the postal service. The ideas contained in the discussion paper are meant as a launching pad for those public consultations.

The task force says a significant decline in letter mail deliveries is sapping revenues at Canada Post, a loss that has yet to be made up from its growing parcel and ad mail businesses.

The panel said the agency’s financial hurdles are “large and growing at an accelerated rate.”

“Although operational viable options have been presented, they alone are insufficient to bridge Canada Post to a financially sustainable future,” its report concluded.

“Other fundamental and transformational changes must be brought to bear over the next number of years to catch up with the changing world.”

Under the current Canadian Postal Service Charter, Canada Post is required to charge the same price for delivering a letter, no matter where it’s addressed across Canada.

But it can, and does, charge the going market rates for parcel delivery. The task force said the government may want to consider a distance-based, speed of service approach to letter deliveries as well, although that would require legislative changes.

Alternatively, it proposes another “one-time large increase” to the cost of a stamp, followed by annual price increases.

It also suggested that Canada Post’s governance structure should be changed.

The task force noted that the agency’s customers appear satisfied with the idea of every-other-day delivery for letter mail, but want parcels delivered at least five days a week, something Canada Post’s infrastructure and negotiated labour contracts don’t allow for.

The Canadian Union of Postal Workers reached a tentative contract with the agency last month, ending months of labour tensions that included threatened job action by union members and a lockout by Canada Post management. A ratification vote on the deal is expected before year’s end.

But the two-year agreement left key issues unresolved, including a pay-equity dispute that is to be negotiated before the new deal expires and the funded status of the employee pension plan.

Canada Post had proposed a new defined-contribution pension plan for fresh hires as it grapples with a solvency deficit in its defined-benefit plan that’s currently estimated at $8.1 billion.

One option presented by the panel for dealing with that deficit is to simply eliminate the solvency calculation, something CUPW had previously suggested.

But the task force said it deemed only one option, partnering with a handful of large banks or credit unions, as marginal at best in its ability to generate revenue.