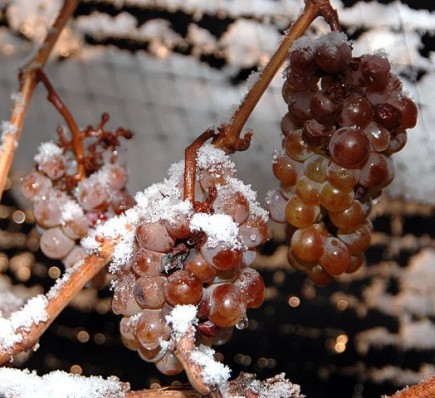 Icewine grapes in Ontario’s Niagara region. Canada is one of the few countries in the world with a wine-growing region that experiences temperatures cold enough to produce the sweet drink. PHOTO: Dominic Rivard, via Wikimedia Commons

TORONTO—A late deep freeze this winter may have lifted the spirits of Ontario’s icewine industry, but the province’s grape growers say bigger questions about the impact of a changing climate are creeping up on their business.

Canada is one of the few countries where temperatures in wine-growing regions drop to the -8 C required for icewine.

Laura Sabourin, who runs an organic vineyard outside St. Catharines, Ont., and supplies grapes to winemakers, said the unseasonably warm temperatures over the past month have delayed her harvest, but in previous years she has picked as late as the last week of January.

“The harvest is going to be down, but that’s not the result of this warm winter,” she said. “It’s the result of previous two cold winters.”

Even though icewine grapes are bred to withstand the cold, temperatures that drop too quickly can kill emerging buds and even the vines themselves—which was the case over the last two seasons, Sabourin said.

Warming temperatures in the Arctic were responsible for the so-called polar vortex effect observed by many in Ontario over the past two years, when bitterly cold air was pulled down from Canada’s North, scientists say.

Icewine yields for those two years have been around one-third lower than the 2012-2013 season, which was nearly perfect for icewine production, said Patrick Gedge, president of the Winery & Grower Alliance of Ontario.

Sabourin said Canadian vineyards have to look at strategies to protect themselves in the face of a changing climate, especially if such significant yearly variations in temperature continue.

She said growers could bring in new varieties of grape that are designed for even tougher winters, adopt new harvesting and preservation techniques from specialized vineyards in colder climates such as burying the grapes, and diversify into other winter crops.

“Eventually you have to reconcile the fact that you’re not going to change the weather so you have to change your strategy,” she said.

Susan Pohorly, who grows icewine grapes and sells them to wineries, said that before the cold snap this week, she had rarely seen it that warm for that long in decades of work at her farm outside Niagara-on-the-Lake, Ont.

“It could very well be that there’s going to be a whole change in the way farming takes place in this area if these silly things keep on happening,” she said.

Icewine is made by leaving grapes on the vine when the cold hits. The grapes themselves dehydrate as the water inside them freezes, leaving a sugary nectar that is then extracted.

Pohorly said later harvests often yield less but usually taste better, and she has harvested as late as February.

Gedge said wine growers are investing in new technologies, such as wind machines that pull down warm air from higher in the atmosphere, to deal with shifting temperatures.

“You can’t affect the weather,” he said. “But what are the technologies or varieties that will allow you to have a little more flexibility out there in terms of a shifting climate?”

Inniskillin winemaker Bruce Nicholson said the unpredictable whims of the Canadian winter mean any experienced vintner has dealt with everything from an ice-cold November to a balmy January.

Because of that variability, he said, Ontario’s grape growers should be well-prepared to deal with any changing weather patterns using technology, grape selection and different harvesting methods.

“I have full confidence that we’ll be doing what we can.”