Ontario plans to cut the small business tax rate to 3.5 per cent starting Jan. 1, the same day it increases its minimum wage from $11.60 to $14 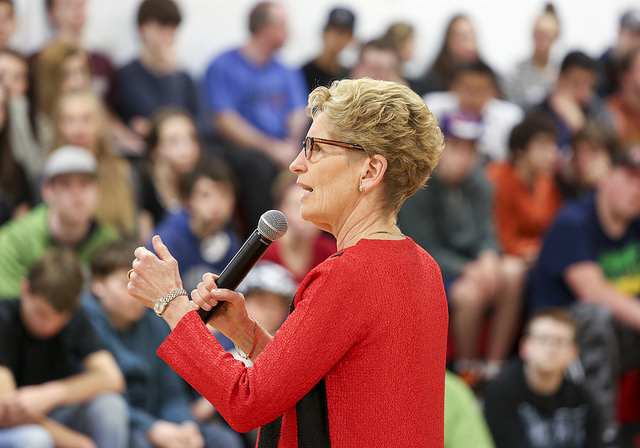 TORONTO—A tax cut for Ontario’s small businesses will not fully offset the impact of an increasing minimum wage, the premier said Nov. 15 as business groups criticized the provincial government for not providing enough support to deal with the hike.

While the province had said for months that help for small businesses was on the way, Wynne said measures revealed in the province’s fall economic update were not meant to fully balance out the impact of the Liberal government’s plan to raise minimum wage to $15 a hour.

“There was never a commitment to offset the increases in minimum wage,” Wynne said. “I was very clear that that was not something that we were going to be able to do, but we want our small businesses to be strong. We want them to be able to thrive. So that’s why we’ve put a number of supports in place.”

The province will also designate that one-third of its procurement spending on goods and services will come from small and medium-sized businesses by 2020. And it will spend $124 million over three years to help companies with fewer than 100 employees who hire youths aged 15 to 29. The government will pay incentives of $1,000 for each worker hired and another $1,000 for each worker retained for at least six months by a small business.

Wynne said the government will have to assess the impact of the wage increase as it continues to roll out.

Minister for Small Business Jeff Leal said the minimum wage hike will have some positive benefits for small business, he said.

“We do know that people who make minimum wage take those dollars and re-invest them instantaneously back into the economy,” he said. “Many of the businesses they spend that money at are small businesses in the province of Ontario.”

But some business groups said the government’s supports fell short.

Jocelyn Bamford, founder of the Coalition of Concerned Manufacturers, said her group was “stunned” that the fall economic statement offered what she characterized as little help for businesses to adjust to the new minimum wage after saying for months support was on the way.

“We wonder if the government is in denial of the damage they will cause the economy or if they just don’t care about jobs in the province,” Bamford said in a statement.

The Canadian Federation of Independent Business said small business owners are very frustrated, very angry“ with the government over the planned wage rise, which it urged the province to slow down.

“They still have the time to put the brakes on this,” said vice president Plamen Petkov. “Do a full economic analysis. Get it right. Determine what is the right amount and what is the right timeline to increase the minimum wage and then go ahead with it.”

Meanwhile, the Ontario Chamber of Commerce said it was shifting its focus to the 2018 spring budget where it thinks the government could offer further supports for business.

“We think the impact of this new legislation will be felt pretty quickly in the new year,” he said. “We need to be able to address some of those concerns or else we’re putting ourselves in a very challenging position … we need to look forward to the budget to see how we can contend with some of those new cost burdens.”

A number of studies conducted by third parties have estimated the minimum wage increase will slow the number of jobs produced by Ontario’s economy in the coming years.

The province’s economic watchdog, the Financial Accountability Office, has estimated more than 50,000 people could lose their jobs due to the minimum wage increase. And an analysis from the Keep Ontario Working Coalition concluded over 185,000 jobs could be impacted by the hike.