The latest KPMG Business Outlook Poll finds digital investments as key to growth, but challenges finding tech talent and supply chain risks could hold them back.

Despite concerns about the impacts of the fourth wave and the end of government stimulus, the leaders of Canada’s small- and medium-sized businesses (SMB) are feeling optimistic about their prospects for the next three years and about the state of the Canadian and global economy, a new KPMG in Canada survey finds.

“Nine in 10 (92 per cent) are confident they have the right strategies to overcome these and other hurdles allowing their business and industry to grow over the next three years,” KPMG officials said in an Oct. 13 news release. 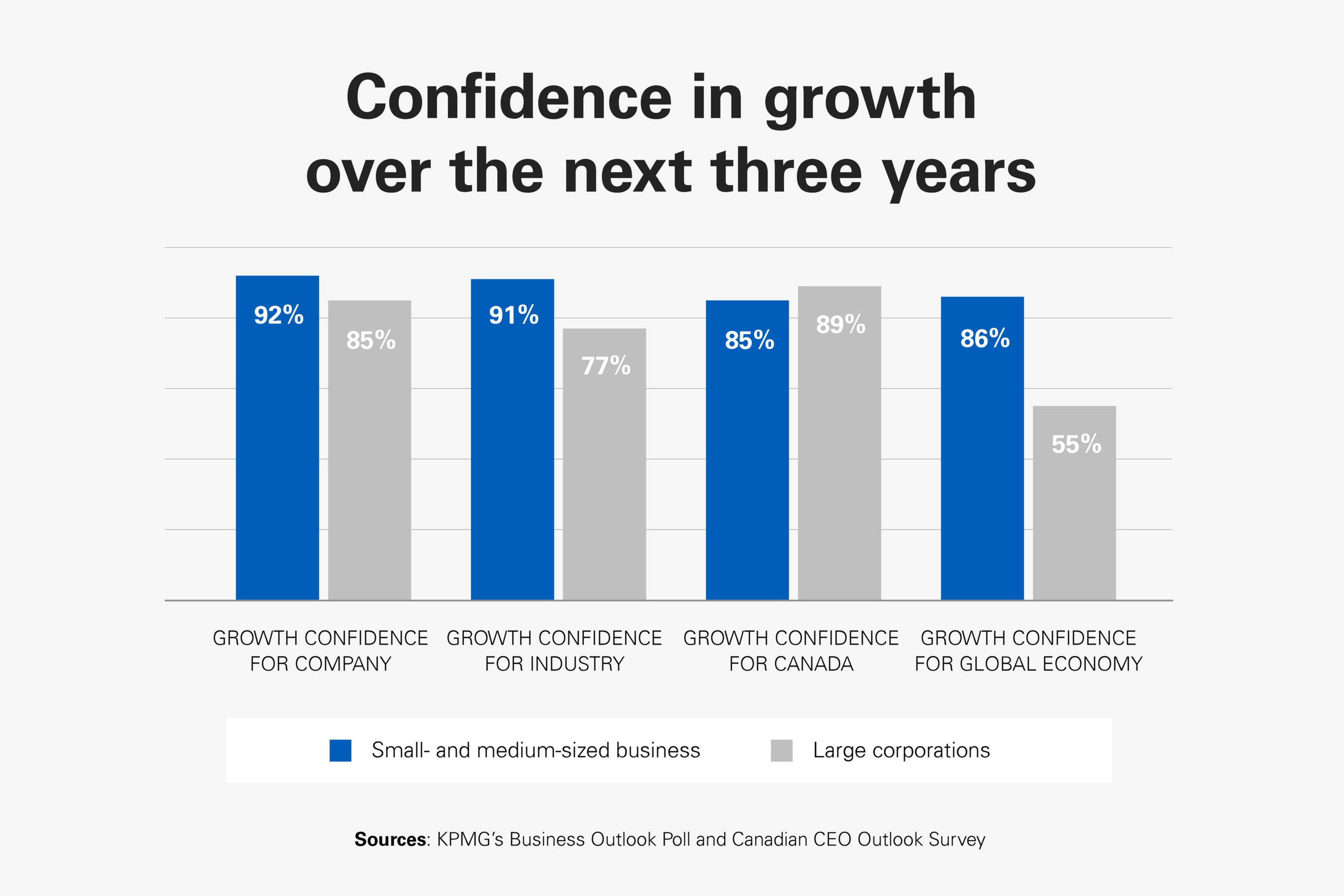 “Canadian small- and medium-sized businesses are more optimistic about their growth prospects over the next few years, and are poised to accelerate the pace of digitization and hire workers with in-demand tech skills,” said Mary Jo Fedy, national leader, KPMG Enterprise. “The majority of private enterprises and family businesses that have made it through the tough times are getting back on their feet, although many have not recovered to pre-pandemic levels. Overall, the long-term outlook is more hopeful, even as economic uncertainties and risks remain.”

The poll findings also show that:

When asked to identify their most-important strategies to achieve their three-year growth objectives, 71 per cent of SMB leaders said they’re relying on organic growth, compared to 25 per cent of corporate CEOs who are more apt to pursue mergers and acquisitions.

In comparison, CEOs of large corporates said the greatest threats to growth are emerging/disruptive technology and regulatory risks and expressed similar concerns regarding growing cybersecurity threats.

Nearly 70 per cent of SMBs plan to increase headcount over the next three years, but say they can’t find workers with the skills necessary to compete in today’s marketplace, raising the table stakes for retaining and attracting talent.; and large corporations didn’t even rank talent risk as a future risk, although it was a top concern a year ago in the initial massive shift to remote work.

“The war for tech talent isn’t going away anytime soon,” Fedy said. “Our poll confirmed that SMBs are finding it harder to attract candidates with the tech skills so critical to their future competitiveness and ability to innovate. SMB leaders may fear losing out to large corporations that have bigger budgets to recruit and pay top dollar for these highly skilled workers.”

Supply chain disruptions are also an ongoing concern, particularly among SMBs that rely on external inputs to operate at full capacity and fulfill previously pent-up consumer demand. Supply chain ranks second only to talent risk as a potential obstacle to SMB growth, although large corporations deemed it a lower risk factor. Almost four in five (79 per cent) SMBs intend to source more product inputs within Canada, compared to only 25 per cent of large corporates.

“The pandemic exposed supply chain vulnerabilities that, in this next phase, are driving a majority of SMBs to rethink their supply chain processes and inputs to avoid future disruption,” said Jerome Thirion, KPMG’s partner and national lead supply chain management consulting. “Many companies right now are faced with finding the right mix between a variety of product offerings, cost-to-serve and supply chain complexity. The pandemic has shown that lowest price isn’t necessarily the best answer for the bottom line and that a balance between global and local supply chains helps to better manage risks, enhance resiliency, and improve customer service. Given the importance of SMBs to our economy, this development bodes well for future domestic investment and Canada’s recovery.”