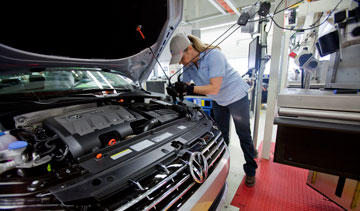 DETROIT—Volkswagen bumped General Motors out of second place in the global auto sales race during the first half of the year, but Toyota is expected to stay in first place.

GM said July 16 that it sold 4.92 million cars and trucks worldwide from January through June. But VW said it sold 4.97 million. Toyota won’t release first-half numbers until later this month. But it was in first place at the end of the first quarter and it expects to sell 10.1 million vehicles this year.

VW sales are growing faster than GM. The German company reported a first-half increase of 5.9 per cent. GM’s global sales rose only 1.4 per cent.

VW passed GM despite U.S. sales being down almost seven per cent. But it showed a seven per cent improvement in Europe and almost a 16 per cent increase in the Asia-Pacific region including China, its largest single market.

GM sales rose nearly 11 per cent in China and two per cent in North America. But the gains were offset by falling sales in Europe, South America and other international markets.

GM wouldn’t comment on dropping to third place in the global sales race, but said its global sales of 2.5 million last quarter were the best second quarter for the company since 2005.