Nissan will be presenting three special edition versions of its top-selling Rogue crossover at the show this April; one car is styled after a tank and two are inspired by the Star Wars films 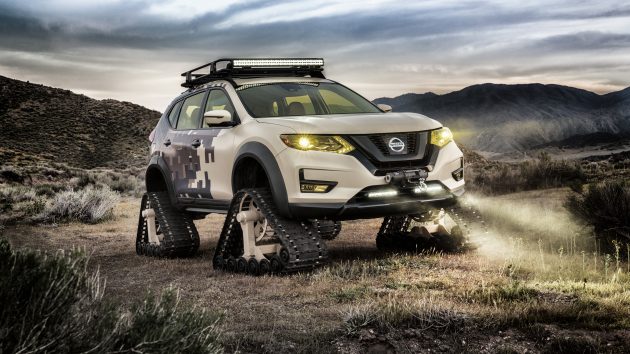 The rubber sand/snow tracks are particularly eye-catching, making this one-off project vehicle more tank than car. The tracks, manufactured by American Track Truck Inc., are 30 inches high and totally replace the Rogue’s regular wheels and tires. The suspension and wheel wells were modified to fit the track system, but otherwise all drivetrain components are standard factory issue.

This off-road monster has 170 horsepower and 175 lb-ft of torque, ideal for climbing snow banks and sand dunes.

“This new Rogue Trail Warrior adds a new dimension to family adventures with its snow/sand tracks, gear basket, winch and camo paint. If you want to stand out from the crowd during a day on the slopes or the beach, this is the vehicle to take,” said Michael Bunce, vice president, Product Planning, Nissan North America.

Also making an appearance at the New York Auto Show are two Rogues inspired by the Star Wars films. One vehicle is modeled after an X-wing fighter, featuring faux thrusters, blasters, side mirror projectors and an astromech droid. The second one-of-a-kind Rogue is wrapped in orange and white graphics and logos, in the style of an X-wing pilot suit.

Nissan is hoping the force will be with the carmaker at the New York Auto Show. PHOTO: Nissan

Tucker continued, “In response to our alliance with Lucasflim, we’ve seen a drastic increase in awareness and sales of the 2017 Nissan Rogue. The excitement displayed by consumers visiting these Star Wars-inspired experiences motivates us and drives the Nissan brand forward.”