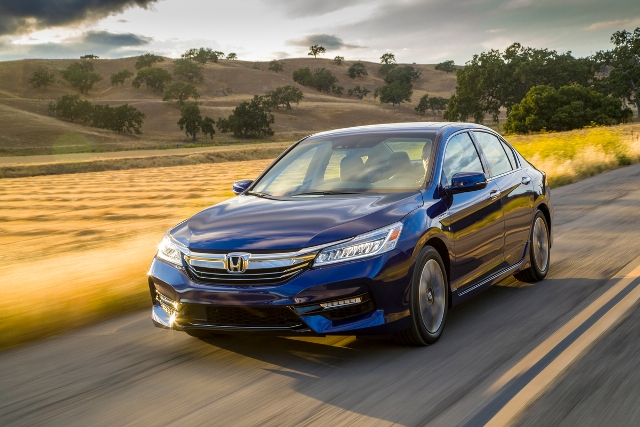 NEW YORK—Honda’s Accord Hybrid has returned for 2017 as a roomy, comfortable mid-size sedan that’s the most fuel-efficient gasoline-electric hybrid four-door car in its class.

In fact, the U.S. government projects the new Accord Hybrid could travel as much as 758 miles (about 1220 kilometres) before needing a fill-up. That’s enough to take it from Montreal to Halifax, or about a fifth of the way across Canada.

This surprising travel range stems from the car’s 15.8-gallon (59.8-litre) gas tank and its fuel economy, which the government rates as 49 mpg in city driving and 47 mpg on highways. Its city driving efficiency is higher because the slower speeds allow the electric motors to provide more of the propulsion power than they do at highway speeds.

The new Accord Hybrid operates with a second-generation powertrain composed of a four-cylinder engine working with two re-engineered hybrid electric motors and a downsized lithium ion battery pack to deliver a total of 212 horsepower. This is not a plug-in hybrid car, but electricity for the electric motors is generated onboard, such as when excess energy generated when coasting or braking is captured and stored in the battery pack.

The new Accord received an overall five out of five stars for occupant crash protection from the federal government.

Techies and regular drivers alike can enjoy the new Accord Hybrid as an easy-to-drive and easy-to-live-with sedan that comes well-equipped with some features that are extra on competing sedans.

Higher trim levels of the Accord Hybrid include heated seats, leather seats, moonroof and a 360-watt premium sound system, among other things. The price of such models doesn’t go much beyond US$37,000 (C$37,400).

The new Accord Hybrid showcases how Honda engineers coaxed more power out of the gas and electric parts of the powertrain—a combined 212 horsepower. The 16.1-foot-long sedan starts from stops quietly and more quickly than expected, thanks to the 232 foot-pounds of torque it gets from the electric power system.

The zero-to-60 mph time for this car has been clocked at 6.9 seconds, which is better than the acceleration time of a non-hybrid Accord and Toyota Camry, which both have four-cylinder engines.

The new Accord Hybrid’s 2-litre, double overhead cam, four-cylinder engine kicks in over time—sometimes not until the car is near 60 mph—unless the car is in EV Mode, which keeps it silent and moving on electric power until the lithium ion battery is depleted. When that happens, the car automatically starts the 2-litre, gas engine to continue the drive. At this point, the electric power works predominantly by mixing and matching with the gas power.

There is a Sport mode, too, for the first time in 2017 that adds more electric power assist than normal.

The Accord Hybrid rides well for a 3,200-plus-pound car, managing most bumps well. Unless the four-cylinder engine is pressed hard and gets loud, the ride is mostly quiet. But the 17-inch tires on the test-driven car reached their grip limits easily.

The new Accord Hybrid has more trunk space than the last model, measuring a decent 13.7 cubic feet. Its rear legroom and headroom are surprisingly generous, at 39.3 and 38.3 inches, respectively.