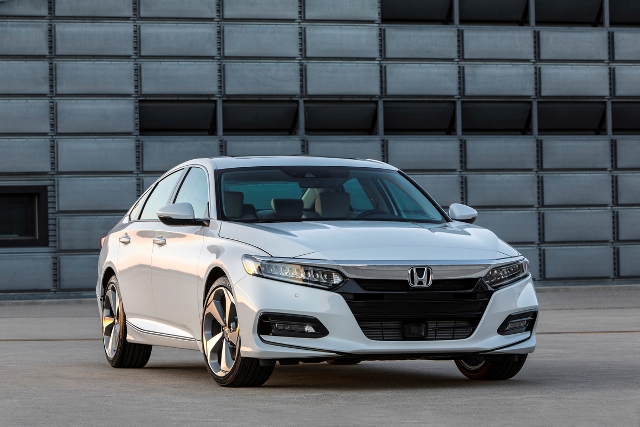 The Accord’s V6 engine option is out in the 2018 version, replaced by two turbocharged four-cylinder engines. PHOTO: Honda

DETROIT—The latest version of Honda’s venerable Accord midsize car is lower, wider, lighter and sleeker than its predecessor, and the company says it’s faster and handles better.

But no matter how nice it looks, how well it drives or how big it is inside, it’ll be a tough sell with North American buyers who are migrating by the thousands from sedans to SUVs and trucks.

Honda is hoping the new Accord, due in showrooms in the fall, will reverse the car’s sales decline. Through June, sales fell 5.5 per cent compared with last year as U.S. buyers shun midsize cars in favour of SUVs. Sales of all midsize cars combined were down nearly 18 per cent during the first half of the year, and the midsize sedan’s share of the market has dropped from 16 per cent five years ago to just under 11 per cent, according to Kelley Blue Book. Still, Honda sold more than 345,000 Accords last year.

The new version, unveiled Friday, is just under an inch lower than the outgoing model, and the distance between the wheels is more than two inches longer. That gives it more 2.5 cubic feet more of interior room and one added cubic foot of trunk space. The 2018 version is 110 to 176 pounds lighter as well, depending on options. The overall length slightly shorter than the outgoing model at 192.1 inches.

Gone is a V6 engine option, replaced by two turbocharged four-cylinder engines. The base four is 1.5 litres and it puts out 192 horsepower with a continuously variable transmission. There’s also an optional 2-Liter four with 252 horsepower mated to a 10-speed automatic transmission. A gas-electric hybrid version also is available.

The 10th generation of the Accord will have Honda’s safety technology suite, which includes automatic emergency braking and lane-keeping assistance, standard on all models.

All the improvements may make the car great, but they likely won’t help sales much as the market shift continues, said Jack Nerad, executive market analyst for Kelley Blue Book. “While we expect the new Accord to be a technological, design and engineering success, it’s unlikely to be the sales success that its predecessor was,” Nerad said.

Price, gas mileage and the exact sale date were not released.

The Accord has grown tremendously in size and power since the first hatchback Accord made its debut in 1976. That car was nearly 30 inches shorter and had a four-cylinder engine that put out only 68 horsepower.