On Wednesday at the New York Auto Show, Ford is to unveil an all-new Navigator, a cushy seven- or eight-seat utility vehicle with an aluminum body, as it attempts to win back buyers of big SUVs 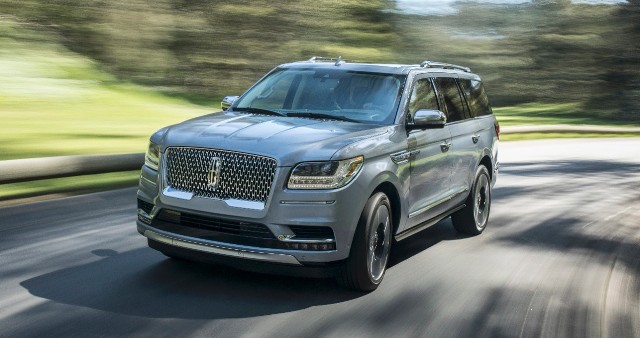 The new 2018 Lincoln Navigator aims to compete with the Cadillac Escalade. PHOTO: Lincoln

NEW YORK—Ford Motor Co.’s Lincoln luxury brand is making a play for a General Motors stronghold, revamping the Navigator truck-based SUV so it can better compete with the Cadillac Escalade and other big GM people haulers.

On Wednesday at the New York International Auto Show, Ford is to unveil an all-new Navigator, a cushy seven- or eight-seat utility vehicle with an aluminum body, as it attempts to win back buyers of the big SUVs. GM says it now controls about 80 per cent of the U.S. market for large, highly profitable SUVs.

Last year, Ford showed off a silver-blue metallic Navigator concept vehicle in New York with an appearance by actor and Lincoln spokesman Matthew McConaughey. But the production version won’t have the concept’s expensive and heavy gull-wing doors or the nautical equipment stored in the back cargo area. McConaughey won’t be here either.

The new Navigator has soft yet supportive leather seats and enough space to hold adults comfortably in all three rows, company designers say. The second and third rows fold flat with the touch of a button to haul cargo.

The SUV also has a 20-speaker sound system. The revamped Navigator comes with a 3.5-litre, twin-turbocharged V6 engine that puts out 450 horsepower. It’s mated to a new 10-speed automatic transmission, which Ford said will give it peak performance at all speeds and better fuel economy.

Price and gas mileage weren’t released, but Kumar Galhotra, the brand’s president, said it will be competitive with rivals in both areas. Currently the big four-wheel-drive Cadillac gets 17 mpg in combined city and highway driving, the same as the current Lincoln. A four-wheel-drive Escalade now starts around $78,000, while the aging Navigator is about $11,000 less.

GM sold nearly 27,000 Escalades last year, while Lincoln sold just over 10,000 Navigators. Galhotra said Ford was the first company to enter the luxury premium big SUV market but “we didn’t invest in the segment.” Ford last revamped the Navigator a decade ago.

The new version is aimed at active families who carry lots of children and gear. “We expect it to be successful,” Galhotra said.

Galhotra says McConaughey will stay with Lincoln for the Navigator ads. “That campaign has been so well received we will use Matthew for this,” he said.