The Calgary-based oil and gas giant has been busy, striking deals with AL Midcoast Holdings LLC and the Canada Pension Plan Investment Board 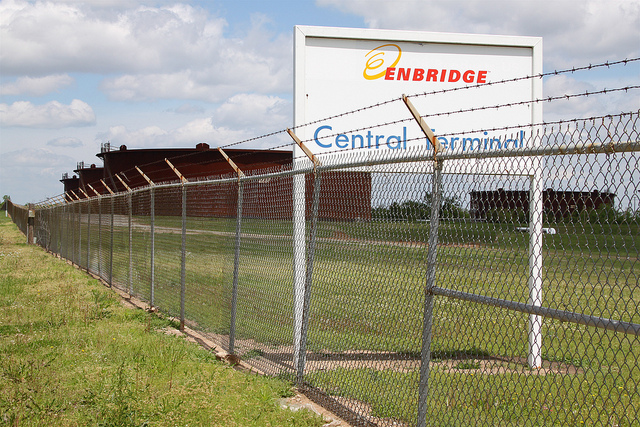 Enbridge has set a goal of selling $3 billion in non-core assets this year. PHOTO: Roy Luck, via Flickr

CALGARY—Enbridge Inc. has signed a deal to sell Midcoast Operating LP in the United States for about $1.44 billion.

The Calgary-based company says Midcoast, which has natural gas and natural gas liquids gathering, processing, transportation and marketing businesses in Texas, Oklahoma and Louisiana, is being bought by AL Midcoast Holdings LLC for US$1.12 billion.

Enbridge chief executive Al Monaco says the sale of Midcoast is an important step in the company’s shift to a pure regulated pipeline and utility model.

The firm has set a goal of selling $3 billion in non-core assets this year.

The transaction is expected to close in the third quarter, subject to regulatory approvals and customary closing conditions.

The sale was the second big deal announced by Enbridge today. In a separate agreement, the company is selling a 49 per cent stake in a group of its renewable power assets to the Canada Pension Plan Investment Board for $1.75 billion.

Enbridge says the agreement will see the creation of a joint venture that includes all of its Canadian renewable power assets, held through Enbridge Income Fund, as well as the Cedar Point Wind Farm in Colorado and the Silver State North Solar Project in Nevada.

Enbridge says it will keep its interests in certain other U.S. renewable power assets.

Under the agreement, CPPIB will fund its share of the remaining costs to complete the German offshore wind projects, estimated at about $500 million, bringing the pension fund’s total commitment to about $2.25 billion.

Enbridge and CPPIB have also signed a deal to form a 50-50 joint venture to pursue future European offshore wind projects.