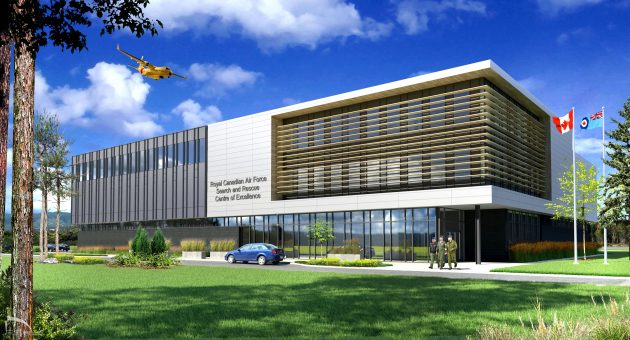 A concept for the Airforce’s C295W training centre in Comox, B.C. PHOTO: CAE

The contract is worth approximately $200 million over the next 11 years and includes options to extend an additional 15 years that would take the value to more than $300 million.

The Airbus C295W is a turboprop plane designed for search and rescue missions, and was selected by the Canadian government as its new Fixed-Wing Search and Rescue (FWSAR) aircraft in Dec. 2016.

The C295W training systems contract is divided into three phases.

First, CAE will lead the design and building of a new training centre facility at Canadian Forces Base Comox, in British Columbia.

Phase two of the contract will commence in late 2019, with a three-year in-service support (ISS) transition period for the training program.

Phase three will begin with the 20-year in-service support phase, which is divided into a base five-year ISS contract with three additional five-year options.

“The search and rescue mission in Canada is both critical and challenging, and we are proud that we will play a role in helping train and prepare the RCAF for this mission,” said Joe Armstrong, VP and general manager, CAE Canada.

CAE has partnered with Airbus in the past, including providing training systems for the C295W at their International Training Center in Seville, Spain.

The RCAF’s C295W training program will maintain and create approximately 300 jobs in Canada over the three-year development phase and approximately 50 jobs, primarily in Comox, B.C., over the in-service support phases.