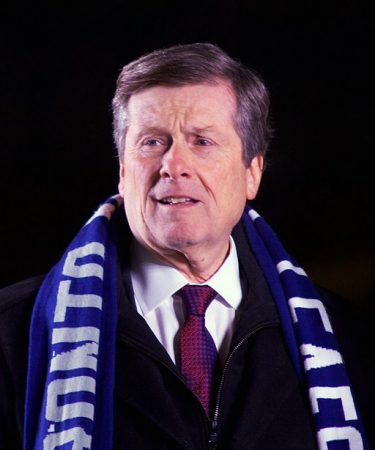 TORONTO – A municipal election nearly derailed by a city-province power struggle entered the home stretch on Wednesday as advance polls opened in Toronto, signalling the beginning of the end of a fraught campaign that’s seen everything from last-minute contenders to pitched court battles.

Mayor John Tory, a former Rogers executive and provincial Conservative party leader who cruised to victory in 2014 after the tumultuous mayoralty of the late Rob Ford, appeared to have a clear path to re-election amid a field of lesser-known rivals until the province decided to change the city’s electoral map.

Ford’s older brother – Premier Doug Ford – shoved the previously sleepy municipal campaign into the spotlight in July when he abruptly announced that he would slash the size of city council nearly in half.

Though Tory still leads in the polls and seems poised for victory on Oct. 22, observers say the two-person race now gives Toronto residents something to focus on besides the city’s fight with the provincial government.

They say Tory and Keesmaat represent two starkly different approaches to city-building, with the incumbent touting his record of fiscal restraint and measured change and Keesmaat running on a platform of bold ideas meant to transform the city.

“I think her platform in dealing with growth is much more aggressive than his,” said York University urban and regional design professor Laura Taylor. “He is in that unfortunate position of having to be a pragmatist because he’s the mayor, and so he has to temper it with his knowledge of how much he actually thinks he can get done.”

Tory’s campaign rhetoric has not shifted sharply from what residents heard during his term at city hall, or during the election that propelled him there in the first place. His mayoralty unfolded with little fanfare, though amid criticisms from Toronto’s left-leaning residents that he was not taking enough action on issues ranging from homelessness to transit expansion.

He was widely criticized, for instance, for not accepting an offer from the federal government to open some unused armouries as temporary shelters during a prolonged spell of bitter cold. He wound up making the request weeks later.

But Tory found himself in a more glaring spotlight in late July when Doug Ford announced he would be realigning Toronto’s ward map along federal and provincial lines, slashing the number of councillors from 47 to 25 mid-campaign.

On that day, Keesmaat threw her hat into the ring while apologizing to her parents for springing her plans on them unexpectedly.

Keesmaat, who worked as Toronto’s chief city planner through parts of both Rob Ford’s and Tory’s tenures, has put forward a number of specific measures that her supporters hail as visionary.

These include building 100,000 affordable housing units over the next decade, introducing a rent-to-own program for middle-class residents priced out of the current market, aggressive expansion of transit, walking and cycling infrastructure, and a plan to shut down some city-owned golf courses for transformation into hubs approved by local communities.

“This used to be a middle-class city but increasingly it is becoming a city of rich and poor,” Keesmaat said at a recent mayoral debate.

Keesmaat’s critics, however, have questioned how she would fund her promises.

Tory, meanwhile, has touted his four-year record, which he said involved launching a transit pilot project on a stretch of one of Toronto’s busiest streets, keeping taxes steady, and taking measures to fight gridlock in the city.

He has also positioned himself as a mayor who can work with two very different leaders at the provincial and federal level, a claim that came under fire when Ford announced his planned council cuts. Tory said he was caught off-guard by the plan, but later conceded he had heard about it from the premier and dismissed it as impractical.

Tory wound up backing a city-led court challenge of Ford’s plan, which seemed poised to succeed when a judge ruled it was unconstitutional. But Ford fought back, threatening to invoke the federal notwithstanding clause to overturn the ruling and see the election conducted on the 25-ward model. In the end, an appeal court panel stayed the original decision.

On Wednesday, while escorting his mother to cast her advance vote, Tory again positioned himself as a consensus-builder.

“My job is to work with the council and to make sure that that council … works with the other governments to get things done for Toronto,” he said. “I’ve certainly tried to do that over the last four years, as I will do over the next four years if I am re-elected.”

Others, however, tout Keesmaat’s background in city planning as the key ingredient needed to help Toronto keep pace with other major urban centres in Canada.

Gil Penalosa, founder of consultant firm 8-80 Cities, said mayors in other urban centres such as Montreal, Calgary, Edmonton and Victoria have successfully governed on plans to expand everything from bike lanes to green spaces.

He said Keesmaat’s platform points to a vision of the city as a diverse, inclusive destination where people of all ages, abilities and income levels can live and work, adding that in his view, Tory has failed to present a similar argument.