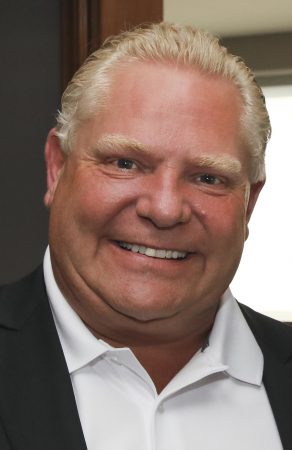 TORONTO – Ontario Premier Doug Ford shuffled his cabinet Monday just months after taking the reins of the province, a significant and unexpected restructuring that followed the resignation of one of his top ministers.

The move – which saw six Progressive Conservative legislators reassigned – was announced in a release Monday morning, prompting suggestions from critics that Ford’s government was struggling, and calls for the premier to explain his decision.

Ford did not give reasons for the new appointments but said in the statement that the shuffle would help his government achieve its goals.

“After four months of unprecedented action, we are taking this opportunity to calibrate our cabinet assignments to ensure we continue to deliver on our commitments to the people,” he said.

Ford said Progressive Conservative House Leader Todd Smith will take on the additional role of minister of economic development, job creation and trade to replace Jim Wilson, who stepped down on Friday.

Sylvia Jones will take over the job of community safety and correctional services minister from Michael Tibollo, who will become minister of tourism, culture and sport.

Bill Walker will join cabinet by succeeding Smith as minister of government and consumer services.

Many ministers who have been in the spotlight since the Tories formed government in June, including Health Minister Christine Elliott, Finance Minister Vic Fedeli and Education Minister Lisa Thompson, are staying in their current roles.

Critics voiced concerns about the suddenness of the shuffle, saying Ford needs to provide reasons for making such significant changes so soon into his mandate.

“These actions make it abundantly clear that Ford is trying to paper over the problems in his hand-picked cabinet. To remove and demote a number of ministers after just a few months is troubling,” NDP deputy leader Sara Singh said in a news conference.

“I think it makes us wonder, you know, is this government ready to govern and are they ready to do the things that they need to do for Ontario’s families.”

That Ford felt the need for such major change so early on does not inspire confidence in his government, said interim Liberal leader John Fraser.

“Premier Ford and his government have not stopped campaigning since the election. They were given a mandate to govern and take care of those things that are important to Ontario families, not to continue campaigning. This shuffle shows they are struggling to make that transition,” Fraser said in a statement.

A public service union said in a statement that the government appears to be “lurching and staggering out of control.”

“Ford pulling the plug on his four-month-old cabinet doesn’t inspire confidence,” said Warren “Smokey” Thomas, president of the Ontario Public Service Employees Union. “This government is drowning in its own bathwater and circling the drain.”

Governments typically sit for roughly a year – enough time to see policies develop – before switching their lineup, said Genevieve Tellier, a political science professor at the University of Ottawa.

It’s also unclear why Ford made so many changes rather than simply replacing Wilson, though it suggests the premier was not satisfied with how a few ministers were handling their portfolios despite praising some of them as recently as last week, Tellier said.

“Maybe Ford was expecting more from those ministries,” she said, noting that transportation appeared to be a priority in the election campaign but has not generated any major policies since then.

“That may be part of the explanation and if so, then we should expect more activity in the coming months about those portfolios.”

The shuffle comes days after Wilson abruptly resigned as minister and left the Tory caucus, which Ford’s office said he did in order to seek treatment for addiction issues. The premier’s office said Monday that Wilson had entered a treatment facility.

Wilson stepped down hours after appearing with Ford at a border crossing near Sarnia, Ont., on Friday whe