Officials: 21 of 55 Northeastern Ontario forest fires remain out of control

One of the fires has grown to 5,612 hectares 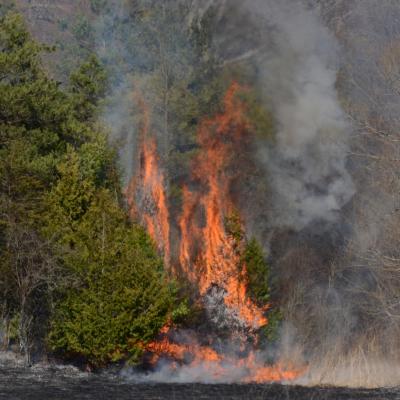 Evacuations have been ordered and a restricted fire zone is in effect. PHOTO: OPSEU/Twitter

TORONTO—Firefighters were battling 55 forest fires as of late Monday in northeast Ontario, of which 21 were not yet under control.

The Ministry of Natural Resources and Forestry said one of the fires dubbed Cochrane 14 northeast of Timmins had grown to 4,899 hectares and remained out of control.

A larger blaze called Parry Sound 33 measured 5,612 hectares as of late Monday and was being fought with planes and helicopters.

On Saturday, the provincial ministry called for a mandatory evacuation of residents in the area with boat access only and for all other residents to be placed on an evacuation alert.

The French River Provincial Park has been fully closed west of Highway 69/400 and all campers were being or have been evacuated.

The ministry says firefighters and equipment “have poured in” from across Canada, Minnesota, Wisconsin and Mexico to help Ontario-based crews.

Due to the continuing extreme fire hazard and the number of wildfires, the ministry has expanded a restricted fire zone.

It now runs north of Rosseau in the Parry Sound area to Caramat in the northwest near Geraldton, and to the Quebec border along Highway 11 and southeast to Renfrew. The area includes Algonquin Park, Parry Sound, Lake Superior Provincial Park, the North Shore of Lake Huron, Wawa, and Hearst.

In a restricted fire zone, the use of open fires such as campfires, or burning of brush or debris, is restricted. Violators could see fines of up to $25,000 and three months in jail, as well as footing the bill for the cost of fighting a forest fire.