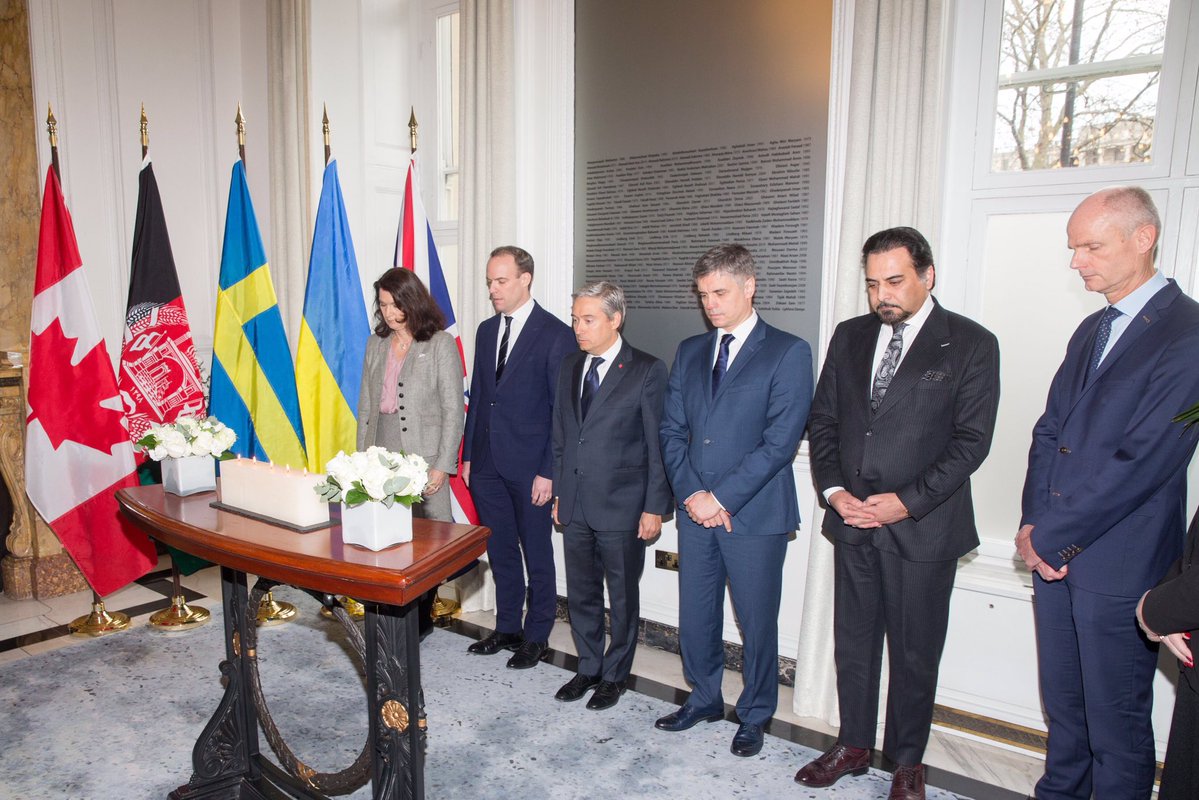 The gathering, of representatives of countries affected by the crash, at Canada House on London’s Trafalgar Square opened with a solemn, wordless ceremony. PHOTO: François-Philippe Champagne/Twitter

LONDON—Canada and other countries are demanding compensation from Iran for the families of people killed when Iranian forces shot down an airliner leaving Tehran last week.

That’s one of five elements in an agreement coming out of a meeting Canada hosted in London Thursday, with representatives from Britain, Sweden, Afghanistan and Ukraine.

The participating countries are also calling for Iran to respect families’ wishes on repatriating the remains of the 176 people killed when the plane came down, full access for consular officials and investigators, and an independent and credible criminal investigation.

Flanked by his fellow foreign ministers at a closing press conference, Champagne said there are consequences for Iran because it has accepted responsibility for the deadly incident.

He says those countries expect Iran to deal with them on providing compensation for victims’ families, and ensure a transparent investigation into the downing of the aircraft.

Everyone on board was killed last week when one, though perhaps two, Iranian surface-to-air missiles hit the Ukrainian airliner. Iran lost 82 nationals in the crash, while 57 Canadians were killed. The Canadian Press has independently confirmed at least 89 victims with ties to Canada, many of them students and professors returning after spending the December break visiting relatives in Iran.

On Wednesday, Prime Minister Justin Trudeau’s parliamentary secretary, Omar Alghabra, said the federal government was exploring options for compensating victims’ families in the interim because the international process could drag on for years.

The gathering at Canada House on London’s Trafalgar Square opened with a solemn, wordless ceremony.

Champagne led the four ministers down a grand staircase, past flags from their countries to a podium where each lit one candle in quiet succession. The ministers then stood shoulder to shoulder behind the flickering flames to lead a moment of silence.

The closed-door meeting in London was to begin with a political update about the situation in Iran and the tensions in the region that led up to the crash, said the official. That was to be followed by an intelligence briefing from Ukrainian Foreign Affairs Minister Vadym Prystaiko as his country has had investigators in Iran for a week.

Dutch Foreign Minister Stef Blok joined talks to provide a lessons-learned briefing based on the experience of the Netherlands in leading its five-year-long probe of the deadly shootdown of Malaysia Airlines flight MH17 over Ukraine, which investigators have blamed on Russia.

Trudeau has been working the phones with his international counterparts in recent days, including with United Nations Secretary General Antonio Guterres and the leaders of Afghanistan, the United Arab Emirates and Jordan.

“The Prime Minister and the Secretary General reaffirmed the need for a complete and thorough international investigation. They welcomed the involvement of the International Civil Aviation Organization (ICAO) in the investigation,” said a readout of Trudeau’s call with Guterres. ICAO is based in Montreal.