Busy waters around Singapore carry a host of hazards

by Annabelle Liang And Wong Maye-E, The Associated Press  August 22, 2017

On August 21, a U.S. Navy destroyer and an oil tanker collided near Singapore. The incident highlights the danger both naval and merchant ships face as they traverse the waters around one of the world's busiest ports 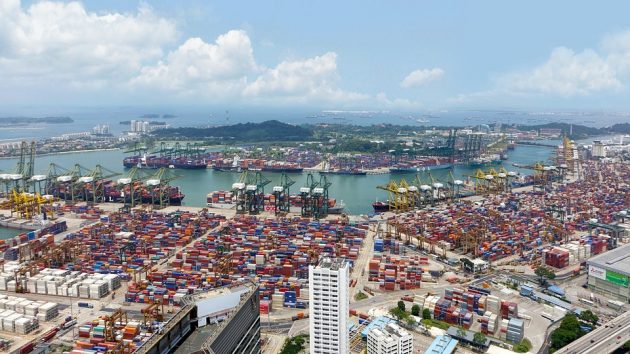 The Port of Singapore is one of the world’s busiest. Ships travelling through the hectic waterways around it are required to sail at 12 nautical miles per hour, less than half the typical speed of a merchant vessel, and separate lanes are established for outgoing and incoming traffic. PHOTO: Pixabay

SINGAPORE—The shipping lanes around Singapore, among the world’s busiest, carry a host of challenges to safe navigation, including a narrow strait, frequently limited visibility and thousands of vessels sailing through daily.

Countless ships have made the voyage in and out of Singapore without incident, but Monday’s pre-dawn collision between a U.S. Navy destroyer and an oil and chemical tanker underlines the risks that normally go unnoticed.

Divers are searching for 10 missing sailors from the USS John S. McCain. Five of their comrades were injured and treated at a Singapore hospital. It was the second major collision in two months involving the U.S. Navy’s 7th Fleet in the Pacific.

Ships travelling into the Singapore Strait or out to the South China Sea travel in separate lanes. A “traffic separation zone” dividing the two can only be entered in emergencies.

They are required to sail at 12 nautical miles per hour—less than half the typical speed of a merchant vessel—in the narrow straits. The waters open up only past Port Klang, neighbouring Malaysia’s main gateway to the sea.

“This is what we call the funnel effect. The place is very congested,” said Tan Hua Chiow, a retired Singapore naval officer of 22 years.

“While ships have sophisticated equipment, the men on watch are the most important. Ships that leave the area tend to speed up,” he added.

Around 2,000 merchant ships travel in the area every day, Tan estimated. A typical merchant ship’s radar can detect obstacles 20 nautical miles (36 kilometres) away.

While large ships like the Alnic MC receive signals from their radar, they take a longer time to react, he said.

It was dark when the Alnic and the McCain collided, but even in daytime visibility can be limited, and not just by the weather. Singapore has repeatedly complained to another neighbour, Indonesia, about smoke wafting from Borneo island, across the strait. Forest fires are commonly set to clear land for plantations, at times creating severe haze and health problems.

In the day, ships switch on sound signals to avoid other ships. At night, they turn on lights and sound signals.

“This is one of the busiest straits in the world. It’s definitely challenging for many ships. They have to avoid other boats, barges, and tug boats with tows that are loaded with sand,” said Raj T., a marine superintendent of a private shipping firm who declined to give his full name. He has been in the industry for 40 years.

Some vessels sail on autopilot in open waters. While there is “no definite rule” preventing ships from using autopilot in narrow channels, shipping vessels typically avoid using it in such circumstances, Raj said.

“It is one of the procedures in a narrow strait to put the ship on hand steering, so that action can be taken quickly,” he said.

Colin Koh, a maritime research fellow at the S. Rajaratnam School of International Studies, said that even if autopilot had been on, both ships should have had lookouts on duty.

“My preliminary guess” about the collision cause, Koh said, “is a human error, not just from the destroyer but also the merchantman.”