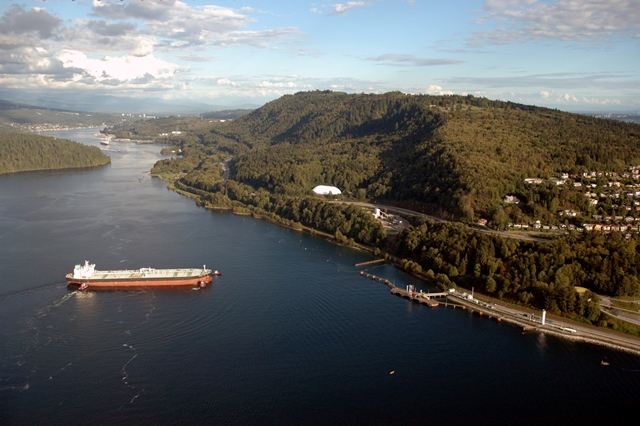 In 2016, Ottawa approved plans to triple the capacity of the existing Trans Mountain pipeline between Edmonton and Burnaby, B.C., but the project has faced stiff opposition. PHOTO: Trans Mountain

HOUSTON—Kinder Morgan’s shareholders have asked the company for more disclosure on its sustainability after a presentation Wednesday by a First Nations chief from British Columbia.

Neskonlith Chief Judy Wilson said she told the company’s annual general meeting in Houston that environmental, social and governance issues can pose significant risks to business and without proper disclosure, shareholders won’t know if they are vulnerable.

Wilson said she also explained the legal risks if Kinder Morgan proceeds with its Trans Mountain pipeline expansion on Indigenous land without consent from First Nations.

“We do not believe the risks of the project have been accurately evaluated nor fully disclosed and we wanted to point that out to the shareholders,” she told a news conference after the meeting.

Wilson put forward a resolution proposing that shareholders ask Kinder Morgan to issue an annual sustainability report describing the company’s analysis of short- and long-term risks, along with plans for mitigating them.

Another resolution from a U.S. asset management company proposed that Kinder Morgan create a report looking at how commitments various countries have made under the Paris climate change agreement will affect the pipeline builder’s portfolio in the long term.

A Kinder Morgan spokesman said both resolutions passed, but neither is binding. Executive chairman Rich Kinder said in a statement the board will “carefully consider the proposals and the information contained in the supporting statements in determining what actions to take with respect to them.”

Because the resolutions are non-binding, shareholders should follow up to show the company that they’re watching and expect their wishes to be expressed, said Lisa Lindsley with advocacy group SumOfUs.

Kinder Morgan could have foreseen issues with its Trans Mountain pipeline expansion if the company had previously committed to putting out sustainability reports, she added.

“Billions of dollars of shareholder value would have been saved if Kinder Morgan had done a better job of anticipating, assessing and mitigating the sustainability risks to its business,” Lindsley said.

In 2016, Ottawa approved plans to triple the capacity of the existing Trans Mountain pipeline between Edmonton and Burnaby, B.C. But the $7.4-billion project has faced significant opposition and legal challenges from environmentalists, First Nations and B.C.’s NDP government.

Kinder Morgan suspended all non-essential spending on the expansion earlier this year, saying ongoing opposition in B.C. and the threat of legal delays was making investors wary of proceeding with the project. The company set May 31 as the deadline for the federal and provincial governments to reach an agreement that would allow the expansion to go ahead.

Wilson said the fact shareholders voted for the sustainability report proposal shows they want the company to be more socially and environmentally responsible, but that won’t stop opposition to the Trans Mountain expansion because it threatens Indigenous culture, spirituality, identity and way of life.

“That means fundamentally more to us than anything that they could offer us,” she said. “This means that there will be further delay and risk and uncertainty for the overall project. And we wanted to carry that message to the shareholders today.”

As the general meeting took place, protests against the expansion project continued in Burnaby, with opponents blocking access to the company’s marine terminal on land and in the water.

About 200 people have been arrested since the middle of March while protesting outside Kinder Morgan’s facilities in Burnaby, the RCMP have said.

The City of Burnaby said Wednesday that it has filed leave to appeal with the Supreme Court of Canada, asking the court to weigh in on a dispute over construction of the Trans Mountain expansion.

The National Energy Board ruled last December that Kinder Morgan could bypass local bylaws as it builds the project and the Federal Court of Appeal dismissed the city’s application to overturn the decision.

Burnaby Mayor Derek Corrigan said in a statement Wednesday that the city does not believe the energy board is the right place to review municipal processes, so it’s taking the issue to Canada’s highest court.