The ride-hailing company's first research hub outside the U.S. will focus on interpreting information from sensors that tell self-driving cars how to interact with nearby vehicles, pedestrians and cyclists 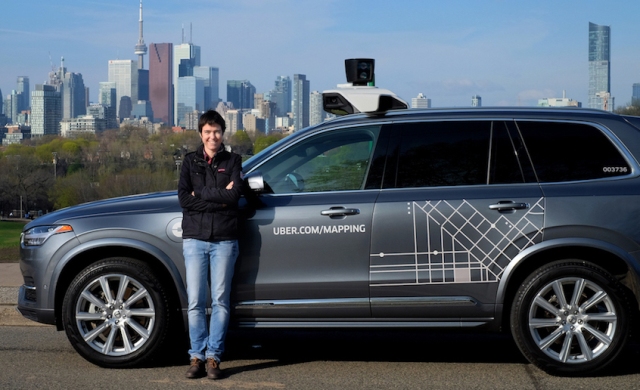 Raquel Urtasun, an associate professor at the University of Toronto will head the automation proejct. PHOTO: Uber

TORONTO—Uber has hailed a prominent artificial-intelligence academic to lead a driverless-car project in Toronto—the ride-hailing company’s first such research hub outside the United States, its CEO announced March 8.

In a blog post, Travis Kalanick said he was proud to have Raquel Urtasun, an associate professor at the University of Toronto, on board. He described her as “one of the world’s leading researchers” in the fields of machine perception and artificial intelligence.

“Raquel will remain in Toronto to lead a new branch of our advanced technologies group—our first outside the U.S.,” Kalanick said in his blog. “Raquel’s work focuses on developing the software that allows self-driving cars to ‘see:’ recognizing objects so they can navigate the world smoothly and safely.”

In an interview from San Francisco, Urtasun told The Canadian Press discussions with Uber began a few months ago. The lab has now begun operation with her and eight of her students with dozens of people still to be hired in the “near future” from what Kalanick described as the region’s “impressive” talent pool.

A key area of focus, she said, will be what is called perception—essentially the brain of the self-driving car. That means coming up with formulas to interpret information from sensors such as video cameras about what’s happening around the vehicle—nearby cars, pedestrians, cyclists—and predict what they might do in the coming seconds.

“It’s a complicated task and this is why we don’t have self-driving cars everywhere right now, but it’s definitely not an impossible quest,” Urtasun said.

The lab will also focus on “localization.”

“In any point in time, the car needs to know where it is in the world,” she said.

Urtasun said she was not concerned about joining the company that is facing a lawsuit from Google’s self-driving car unit. The claim alleges Uber used stolen trade secrets to develop sensors for its autonomous vehicles. Urtasun said her research area is in a different area.

“If I had doubts that Uber did something wrong, I would never have joined the company,” Urtasun said.

She also acknowledged her hire as a high-profile woman by a company looking to change an image some have attacked as misogynist, saying she discussed the issue with Kalanick.

“The company is doing everything necessary to change whatever the remaining issues are,” she said.

The associate computer science professor, originally from Pamplona in Spain, has previously been an assistant professor at the Toyota Technological Institute at Chicago and a visiting professor in Switzerland. Her research interests include machine learning, computer vision, robotics and remote sensing.

In February, she was awarded a fellowship given each year to Canada’s top six scientists and engineers for her work on machine perception for self-driving cars.

While she won’t predict when self-driving cars might become a common sight, she does say those able to ply simple, controlled routes might be in place “relatively soon.”

Kalanick said Toronto has become an important hub of artificial intelligence research, which he called “critical to the future of transportation.”

“That’s why we’re also making a significant multi-year financial commitment as a platinum sponsor of the Vector Institute, which Raquel helped to set up as a co-founder,” Kalanick said.

Urtasun is one of the co-founders of the independent, non-profit institute set up in March. Its aim is to push Canada to the forefront of research into artificial intelligence.

The new lab will focus on improved mapping for autonomous cars but the company, which also does driverless-car research in San Francisco and Pittsburgh, said it had no plans to actually test the vehicles in Toronto.

“Self-driving technology promises to make our roads safer, our environment healthier and our cities more livable,” Kalanick said. “While there’s still a lot of work to be done, we believe that the combination of our global ride-sharing network with the cutting-edge software and hardware being built by our teams will make this vision a reality.”