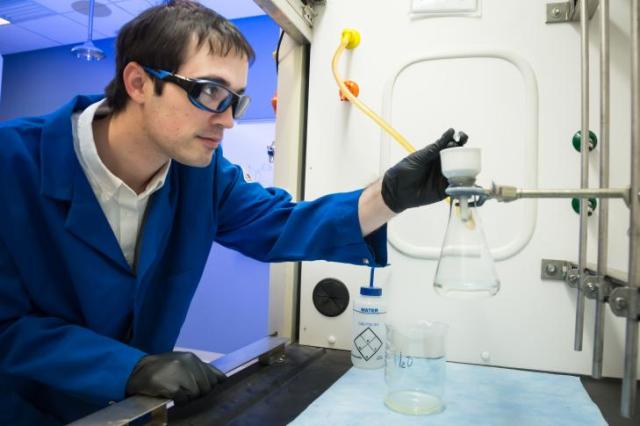 Relying on a compound known as guanidine, the U.S. Department of Energy scientists say the process could provide a new way to use carbon capture and storage (CCS) technology to combat climate change.

The team stumbled upon the process when studying ways to remove environmental contaminants from water.

“When we left an aqueous solution of the guanidine open to air, beautiful prism-like crystals started to form,” Radu Custelcean, one of the Oak Ridge scientists, said in a statement. “After analyzing their structure by X-ray diffraction, we were surprised to find the crystals contained carbonate, which forms when carbon dioxide from air reacts with water.”

Once the carbon is contained within the crystals, it must be separated from the compound before being transported for storage. The Oak Ridge scientists say that while traditional direct-air capture materials must be heated to 900 C in order to separate the CO2—a process that often releases more carbon than is captured—the new method requires significantly less heat.

“Through our process, we were able to release the bound carbon dioxide by heating the crystals at 80-120 degrees Celsius, which is relatively mild when compared with current methods,” Custelcean said.

The guanidine can then be reused. The scientists have currently put the material through three capture and release cycles.

Despite the promising result, Custelcean said the researchers still need to build a better understanding of guanidine before determining how it could function in CCS systems. The team is currently analyzing how the carbonate binds to the crystals and aim to establish a more thorough knowledge of the molecular mechanisms responsible for the guanidine capturing the CO2.

While the majority of CCS technologies remain focused on the point of release, like the new Oak Ridge process, Calgary-based Carbon Engineering is also working on a direct-from-the-air solution. The Canadian cleantech firm is currently piloting a carbon capture plant in Squamish B.C. that scrubs CO2 directly from the atmosphere.