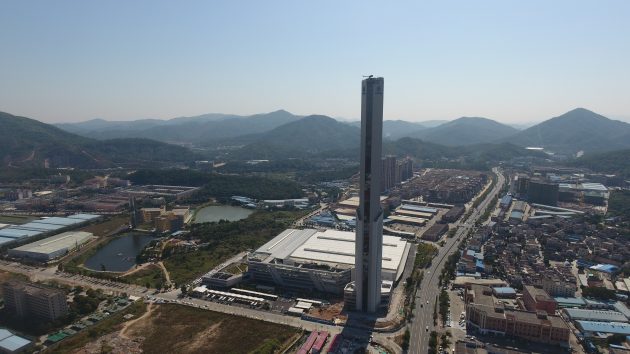 ESSEN, Netherlands and ZHONGSHAN, China—Dutch manufacturer Thyssenkrupp Elevator has opened its newest plant and test tower, which was built in Zhongshan City, China.

Standing at 248-meters-high (31 floors above the ground), the test tower is one of the tallest in the world. With 13 shafts, the test tower can be used to examine new concepts and products—including a new high-speed elevator the company hopes will hit speeds of up to 18 meters per second. Thyssenkrupp is also testing the world’s first “ropeless” elevator system, dubbed the MULTI.

The Dutch elevator maker already operates one test tower in Germany—where the company is headquartered—which was inaugurated last October.

“The testing process is important to ensure we can flex to what people really want and need,” said Andreas Schierenbeck, CEO of Thyssenkrupp Elevator. “China is an exciting territory to be operating in, with as many as 500,000 units being installed each year, so it was a natural choice to build our first international test tower there.”