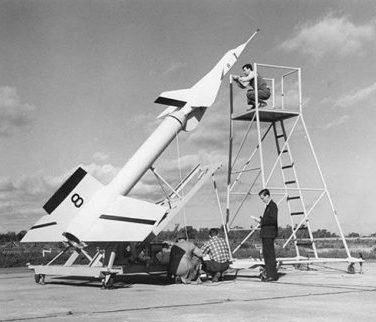 The prototypes were launched into Lake Ontario in the 1950s and are among the few relics of the jet fighter program that weren’t destroyed. PHOTO: Kraken

TORONTO—Search crews say they have found a test model of the Avro Arrow, an advanced Canadian fighter jet that was controversially scrapped in 1959, on the floor of Lake Ontario.

OEX Recovery Group, which is spearheading the Raise the Arrow expedition, said in a news release Sept. 7 that new sonar imagery confirmed the discovery of a three-metre long Avro Arrow free-flight model that has spent decades underwater.

The mission to find nine models of the Avro Arrow began in late July near Point Petre, Ont., with a submarine scouring the waters of Lake Ontario.

The expedition also is meant to coincide with next year’s 60th anniversary of Avro Arrow’s first test flight.

The models were first launched from a military base in the 1950s as part of the development of the Avro Arrow, the first and only supersonic interceptor built by the Canadian military to counter potential Soviet bomber attacks in North America’s Arctic.

All materials, including completed jets, were ordered to be destroyed when Ottawa abruptly cancelled the Avro Arrow project.

The models discovered the by search team will find new homes at the Canada Aviation and Space Museum in Ottawa and the National Air Force Museum of Canada in Trenton, Ont.